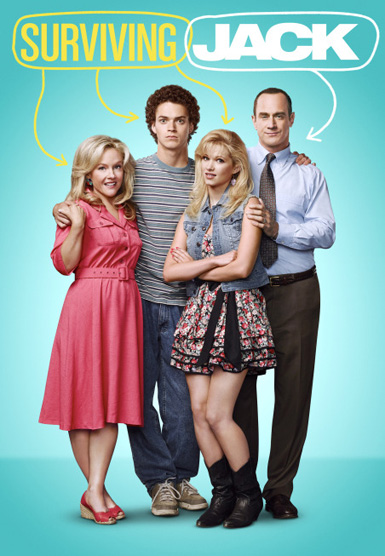 TV show description:
Set in the 1990s, this single-camera comedy is based on the autobiographical book I Suck at Girls by Justin Halpern (Sh*t My Dad Says).

Jack Dunlevy (Christopher Meloni) is an ex-military oncologist who’s also a no-bull kind of guy. He sees little, if any, need to sugar-coat the truth. Jack’s been a typical working dad who left most of the parenting to his stay-at-home wife. But now, his wife Joanne (Rachael Harris) is starting law school and this leaves Jack as a full-time parent for the very first time.

Their teenage son Frankie (Connor Buckley) is just starting his freshman year in high school. He’s quick-witted but unsure of himself and just wants to fly under the radar. But over the summer, he grew 10 inches, threw a no-hitter against a rival team, and started to attract girls. These events started getting him noticed which put him in some awkward situations that he wasn’t ready for.

No matter how embarrassing Frankie’s situations are, Jack is there to pick up the pieces and lead his son to manhood — with the least gentle hand possible. Although Jack may be unorthodox and unfiltered, his intentions are always good however and he’s Frankie’s only resource right now.

Even more confusing to Jack is his daughter, Rachel (Claudia Lee), a gorgeous and super-smart 17-year-old high school junior. Up until now, she’s done everything right. But no longer under the watchful eye of her mother, she has become a handful.

In addition to disciplining his own children, Jack looks out for Frankie’s best friends. George (Kevin Hernandez) is an overly confident Mexican-American with a big vocabulary while Mikey (Tyler Foden) is a tough kid from a broken home.

Only time will tell if Jack’s blunt and unpredictable parenting style will keep his kids out of trouble — or if Joanne will have to put down the law books and step in to keep the family order.

What do you think? Do you like the Surviving Jack TV series? Do you think it should have been cancelled or renewed for a second season?

This show it awesome, definitely needs to be renewed! !! Love it

Get the show back on the air or sell the rights to some other network !!!!

This show is great. I love the attitude of Jack……….. the nurturing of mom and all the teen characters. It is a whole lot funnier than some of the other stuff they’ve put out. It is a huge mistake to lose this one…… I am greatly saddened

This is a review of ‘Surviving Jack’ from the Netflix website. It says it all. I have absolutely fallen in love with this show. It is laugh-out-loud funny, or on occasion, guffaw out loud. Smart, witty and acidic with a touch of satire, every episode is crafted to perfection. Christopher Meloni plays an Archie Bunker style curmudgeon who says exactly what he is thinking and defies pretty much every law of social convention. The whole family sit-com is set in the late 1980s, possibly early 90s, with excellent social references and so much great music, it’s a fitting tribute to… Read more »

Really good show absolutely makes you laugh!! Can’t believe they would take it off so soon and not get a chance to get established!!!

This show needs to be RENEWED! It is a breath of fresh air and Christopher Meloni is over the top as Jack. My husband and I laugh our heads off every single episode.

I am so bummed the show was cancelled. My husband and I looked forward to watching the show every week. Going to high in the 90’s brought back a lot of memories.
PLEASE BRING THE SHOW BACK!

Surviving Jack is a GREAT show that parents can relate with. It should not of been cancelled. We watch it faithfully with our kids.

This is a really funny program that parents can relate to a have a good laugh!!!!! THIS SHOULD NOT BE CANCELLED!!!

This show was amazing and funny! It brought me back to my childhood of growing up in the 90’s. Such a shame that they cancelled a great show and let others that aren’t as great stay on. They need to get rid of old shows that have been around forever and give more new shows a chance. This was a great family show and I’m sad to see it go.

It was a show I actually liked in a long long time…….please don’t cancel

OMG- THIS STINKS. I just watched the last two episodes on demand with my family, which includes a 13 year old girl and we laughed ourselves silly. I love this show. The music is awesome and I’m totally reliving my glory years while picking up fantastic parenting skills! Christopher Meloni is awesome as Jack- his dead pan line delivery is comedy genius. Rachel Harris is the best as Joanne….come on now- that’s a real mom right there! There is no reason to cancel this show after one season. It’s just getting into the groove. This show is just getting acknowledged… Read more »

Thanks, Anonymous, for posting the link for this petition to save ‘Surviving Jack’. I’ve already signed, sent it on and posted it myself.

This was one of the BEST new comedies on TV this year – it truly was laugh out loud funny! I couldn’t believe FOX cancelled it. Still can’t. I’m about done trying to watch ANY new shows on FOX. They don’t give good shows any chance at all to develop an audience. This one would have made it, if the twerks at FOX had an ounce of patience to let it… It was funnier than almost anything else out there – and we all NEED a laugh now and then!

You are so right, Linda. Why cancel a show before it has the opportunity to gain more of an audience? Seven episodes and that’s it? Come on, FOX!

The way this show was “dumped” into the rotation made me think that Fox wanted to use it as ratings cannon fodder. From the first airing it was going to take a miracle for more episodes to be ordered for next year. The show actually had potential if the adults in it understood that the stars were going to be the teens. I am not sure they can make that adjustment. It was good to see Christopher Meloni in something completely different. It was going to take a few episodes to feel comfortable that his character was not going to… Read more »