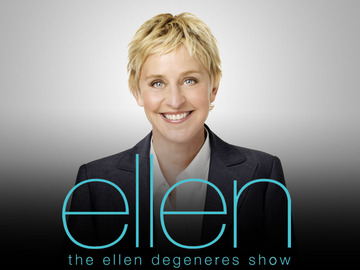 Ellen has a reason to keep on dancing. The Ellen DeGeneres Show has been renewed by NBC owned stations through 2017.

Nationally, “Ellen” is the number-one syndicated talk show (tied with “Dr. Phil”) for the 2012-13 season among Women 25-54. In a season when talk ratings have been challenged, “Ellen’s” ratings continue to grow, with a national rating increase of +13% year to year. It is only one of three returning talk shows growing Women 25-54 audience over the prior year. In addition, “Ellen” is delivering its biggest audience (Viewer 2+ 000s) ever and strongest Women and Adult 25-54 rating since 2005-06 season.

“Ellen is quite simply the best,” said Werner. “Day in and day out she and her team produce a unique and compelling hour of entertainment which is appointment television for legions of women. We are absolutely thrilled that NBC, Ellen, Warner Bros. and all of our station partners will be continuing our successful relationship for years to come.”

“‘Ellen’ is ‘the crown jewel’ of the NBC Owned Television Stations’ daytime lineup. In fact, ‘Ellen’ is the top choice for women 25-54 in her time period in seven of our markets, including New York, Los Angeles and Chicago, this season,” said Staab. “We are proud and thrilled to extend our relationship with Ellen DeGeneres, all the great people working on her show and our friends at Warner Bros.”

“‘Ellen’ is having its best season ever during the tenth anniversary of the show. It is a testament to Ellen’s brilliance as a talent and our extraordinary production team,” said Hilary Estey McLoughlin, President, Telepictures Productions. “We are so proud of the show and grateful for all the support and partnership of NBC and all of our stations. We look forward to collaborating with them to build ‘Ellen’ to even greater success in the years ahead.”

“The Ellen DeGeneres Show,” now in its tenth season, celebrates a decade of laughter and fun, highlighting Ellen’s one-of-a-kind observational humor, warmth and insight, and featuring the biggest stars from television, film, music and more. During its ten seasons, the show has earned an impressive total of 38 Daytime Emmy® Awards. Additionally, DeGeneres has won 13 People’s Choice Awards and four Teen Choice Awards, including “Choice Comedian” for a fourth consecutive year in 2012. The show has also won two Genesis Awards and a GLAAD Media Award for “Outstanding Talk Show Episode.”

“The Ellen DeGeneres Show” premiered on September 8, 2003 and was the highest-rated freshman syndicated show of the 2003-2004 season. Ellen serves as an Executive Producer of the series with Mary Connelly, Ed Glavin and Andy Lassner. Originating from Warner Bros. Studios in Burbank, “The Ellen DeGeneres Show” is produced by A Very Good Production and WAD Productions, Inc. in association with Telepictures, an industry leading and Emmy® award-winning producer of innovative, multiplatform advertiser friendly television and digital content for the syndication, cable and digital marketplace, and is distributed by Warner Bros. Domestic Television Distribution.

What do you think? Are you glad to hear that DeGeneres’ talk show will be around for years to come?

Yes, yes and yes! Great news that Ellen is planning to continue for years to come!!

Ellen, my husband Roger and I (Kim) LOVE to watch your show every single day! So much love and happiness in our home because of YOU!!! It is so important to us to have that. Because we are both disabled, and, ya know, we don’t focus on any limits or problems we have. That just doesn’t change our situation and besides, others may have things a lot tougher than we do! Ellen your show is the most important time of our day. Thank you so much for who you are what you do for the whole world!!! I have a… Read more »

Ellen. Words will NEVER express how happy I m that your smile humor compassion love will not be taken away from us . We love you Ellen

So happy to hear that Ellen has been renewed! It would be a shame to not have the laughter that she brings to the world everyday! I say they should give her another 10+ years! What does everyone else think? I would say most would agree! WE LOVE YOU ELLEN! #ellenrocks #heresto10moreyears

When does her new show on NBC start. And what time.

I saw that the Ellen Show was canceled, I did not believe that so I looked it up. See Ellen has been picked until 2017! Ellen I live with MS, my life is up and down. I look forward to 4:00pm each week day because I know you will make me laugh. Your special guest also lift my spirits. Thank you for your hard work! Love Rachael

I look forward to watching her show, I really do not understand why there is a problem with her telling a little white lie. She is beautiful inside and out, she makes people feel good about themselves and I do not think I have ever seen one of her shows that I did not like. Go Ellen you rock !!!!!!!

I love Ellen even my mom we watch her show when we can. She is my idol