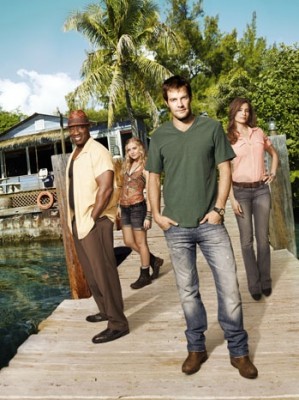 TV show description:
This procedural TV series revolves around a war veteran with the extraordinary ability to find things that other people can’t.

Iraq war veteran Walter Sherman (Geoff Stults) gained a reputation in his Army days as being the go-to guy for tracking down insurgents and deserters and finding improvised explosive devices (IEDs). Unfortunately one IED found Walter before he could find it — resulting in severe brain damage with a lasting and unexpected effect. Walter transformed from someone skilled at the standard recovery of people and things to someone much more extraordinary: a Finder.

With this newly discovered ability, Walter locates almost anything for just about anyone. Once he’s on a case, there’s no turning back until he’s found exactly what he’s looking for — whether it’s a dead body, a missing father, a guitar pick, a murder weapon, or a pair of lucky socks.

After leaving the military, word of Walter’s reputation made it’s way to generals, politicians, and other powerful figures. His first post-military assignment was to find the head of the CIA’s missing daughter and bring her home. He accomplished that mission successfully, and since then has never been without an assignment.

Walter’s legal advisor and brother-in-arms is Leo Knox (Michael Clarke Duncan). He was once an intense and extremely obese lawyer, a man driven by hate. But, after the deaths of his wife and children, Leo transformed himself into a gentle giant and philosopher. Leo owns the ramshackle “Ends of the Earth” bar in Looking Glass Key, Florida. It also serves as a makeshift office and home base for Walter.

Leo also keeps a close eye on an unruly teenager named Willa Monday (Maddie Hasson). Currently on probation, Willa was raised to be a criminal by her extended family of gypsies. Under Leo’s protection, Willa works at his bar where he and Walter occasionally use her hard-earned skills in their own work.

Walter has an on-again off-again relationship with Deputy U.S. Marshal Isabel Zambada (Mercedes Masohn), a beautiful and ambitious cop-on-the-rise. However, as much as Isabel likes Walter and utilizes him to further her own career, she knows that he may be an impediment to her rise through the ranks. For Walter and Isabel, it’s a constant balancing act between career ambitions and matters of the heart.

Because of his rare skills, Walter is often asked to find a person or a thing that law enforcement either will not or cannot find. Walter’s occasional social ineptitude, general paranoia, and case-related tunnel vision make him somewhat difficult to work with. Thanks to the help and guidance of Leo, as well as the grateful friends and connections he has made through his work, he ultimately finds meaning in his own life by finding someone or something that other people have lost.

Series Finale:
Episode 13 — The Boy with the Bucket
A museum’s art authenticator tells Walter and Leo that a computer analysis of a previously unknown painting by Winslow Homer – which had been stolen and found by Walter four years ago – has now determined that the painting is a forgery. Walter agrees to find the real painting.

Back at Leo’s bar, Walter’s older brother, Langston, says that their father, Franklin, has just days to live and wants to see Walter.

When Walter and Langston visit Franklin, he asks Walter to find their mother, Elaine. Walter refuses because Elaine’s an alcoholic who abandoned their family for another man. He’s also angry with Franklin for trying to have him committed after Walter’s personality changed after he was injured in Iraq.

Walter tells Isabel that Elaine is in the witness protection program because her second husband testified against the Lunar Temple cult, so the cult officials issued a hit on them. Isabel refuses to help. Leo, however, persuades Walter to fulfill Franklin’s dying wish.

Walter begins ruling out possible places for Elaine’s relocation, noting that the probable cities must be large enough that the Lunar Temple can’t stake out AA meetings and must have a significant musical community because Elaine is a musician. They eventually eliminate every potential location except Memphis.

Walter wants Isabel to ask art thief Jason Stefanian if he switched the painting before Walter stole it back from him, adding that if you promise to fulfill someone’s deepest desire, even a criminal will cooperate. Stefanian tells Leo and Isabel that he’s a true art lover who wants to be able to go to museums again. Isabel promises to arrange this, so Stefanian agrees to help them.

When Walter and Langston ask an AA meeting in Memphis for information about Elaine, a man named Bill objects, but the members agree to hear the brothers’ plea. Afterward, another man slips Walter an address.

Uncle Shadrack, meanwhile, hands Willa the invitation to her and Timo’s wedding – which is scheduled for next week.
Leo shows Stefanian the forged painting, which the museum now has shredded. Upon hearing this, Walter wants Willa piece it back together.

When Walter and Langston arrive at the address, U.S. Marshall Gibson arrests them. Leo and Isabel get Walter out of jail, provided he promises to stop looking for Elaine. Afterward, Isabel — knowing that Walter won’t stop — tells Walter that Elaine left Memphis three years ago.

Meanwhile, Willa asks probation officer Farrel to put her in jail. Farrel realizes that Willa really wants to avoid the arranged marriage and refuses, saying that Willa needs to separate herself from her criminal family.

Stefanian examines the forgery and says it’s real. The art authenticator disagrees – and so does Walter.

Walter tells Langston that bad things happen to him when he doesn’t find what he’s looking for. Langston asks if Walter’s search for Elaine is interfering with his finding the stolen painting. Franklin says Walter, owing to his post-injury personality change, is not his son. Walter disagrees. When Franklin says, “We are who we think we are,” Looking at a family photograph, Walter has a breakthrough.

Walter hires a blacksmith to replicate the weathervane — which features a mermaid, a boy flying a kite, and another boy with a bucket — in the photograph. The blacksmith says that she’s made this before, for a woman in Naples, Florida. Walter explains that Langston is the boy with the kite, he’s the boy with the bucket, and the woman is our mother. He also wants Leo to check private mental hospitals for a person with access to topnotch art supplies who’s using the name Winslow Homer.

Meanwhile, Willa tells Shadrack that she doesn’t want to marry Timo. Shadrack says that Willa’s ability to lie is worth more to the family than anything else and this marriage will bind her to them, so forget it.

Walter tells Langston that Elaine’s second husband wouldn’t allow her to keep the weathervane because it reminded him of the family he broke up. However, when she left him, she had a replica made.

Willa finds a doctoral thesis on the Internet about a patient who thinks he’s Winslow Homer with an example of a painting that matches the forgery. So all Leo has to do is find a hospital with a view that matches what’s seen in the picture.
Walter and Langston locate the house with the weathervane and greet Elaine, who agrees to visit Franklin. Meanwhile, Willa tells Leo that she’s leaving to see her probation officer.

As Walter, Langston, and Elaine head toward Franklin’s, Walter notices headlights in the mirror, and reverses into the car that’s following them. Bill from the AA meeting and two other men exit the car. They’re from the Lunar Temple – and they want Elaine.

Walter tosses Bill aside. The others fire shots, but Walter shields himself with Bill, then grabs one gunman, forces him to shoot the other, and breaks the second gunman’s neck.

When a reunited Elaine and Franklin hug, Walter notices that Franklin keeps his eyes on his sons – finding Elaine was just his excuse to see Walter again. Elaine and Langston leave Walter and Franklin to make amends before Franklin expires.

Meanwhile, Farrel asks Leo for Willa’s whereabouts and Leo finds a note from Willa that reads, “Thank you. I’m sorry.”

As U.S. marshals subdue Walter, Isabel and Leo watch a man dressed and painting like Winslow Homer. Meanwhile, Shadrack decks Timo, Leo places a “for rent” sign on Willa’s trailer, and Willa walks down a lonesome road.
First aired: May 11, 2012.

What do you think? Should The Finder have been cancelled? Why do you think more people didn’t watch? What would you have liked to see happen in season two?

I am on my second tour of Finder episodes. It connects with me on many levels and had all the action, drama, love-kinda and human interaction that I enjoy in my entertainment. The Florida Keys beach bar setting is so welcoming on cold Wisconsin nights. Hope isn’t a good planning tool but I would hope that someone relaunches the show.

The “Friday night death slot” or “Friday evening death slot” is a perceived graveyard slot in American television. It implies that a television program in the United States scheduled on Friday evenings (typically, between 8:00 and 11:00 p.m. ET) is destined for cancellation. The Finder, Dark Angel. Firefly, Prison Break, Brothers to name a few. You’d think the networks must know this and would schedule only successful shows on Hell Night. Kind of like throwing the gladiators to the lions. F**K Network TV. I only binge watch on Putlocker, no commercials and you can start season 1 through the finale… Read more »

Wth!!! I enjoyed this show only to see it cancelled. This deserves to be reserected and at least finish it with a conclusion.

This show was so interesting. I was sad to see it end. I would love to see it comeback.

It is a wonderful show. Please bring it back!