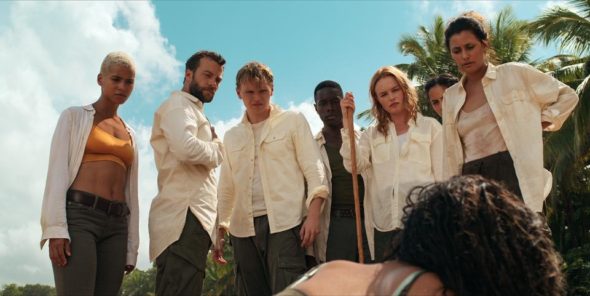 Would you be “Lost” without additional seasons of The I-Land? Has The I-Land TV show been cancelled or renewed for a second season on Netflix? The television vulture is watching all the latest TV cancellation and renewal news, so this page is the place to track the status of The I-Land, season two. Bookmark it, or subscribe for the latest updates. Remember, the television vulture is watching your shows. Are you?

Streaming on the Netflix paid subscription platform, The I-Land stars Kate Bosworth, Natalie Martinez, Ronald Peet, Kyle Schmid, Gilles Geary, Sibylla Deen, Anthony Lee Medina, Kota Eberhardt, Michelle Veintimilla and Alex Pettyfer. A science fiction thriller series, The I-Land follows a group of 10 people who wake up on a treacherous island. With no memory of who they are or how they got there, the castaways set off on a trek to try to find a way back home — wherever that is. The 10 soon discover that this world is not as it seems. Faced with the island’s extreme psychological and physical challenges, they must rise to their better selves — or die as their worst ones.

This series was envisioned as a miniseries and Netflix (in the French region) has confirmed that there won’t be a second season. That being said, if The I-Land becomes incredibly popular, I could see Netlfix rethinking their single season plan (ala Big Little Lies on HBO). I’ll keep an eye on the trades and press releases and update this page with any new developments. Subscribe for free alerts about The I-Land.

What do you think? Were you hoping that the The I-Land TV show would be renewed for a second season? Would you watch another season?

YES ..Ive been waiting for the 2nd season to come on!! Please bring it back on!!

Would definitively watch a 2-nd season. It’s full of high emotion and expectations. Barely waiting to see next

I stumbled upon the show. I loved every bit of it, I’m sad to hear that’s all there’s gonna be of it tho