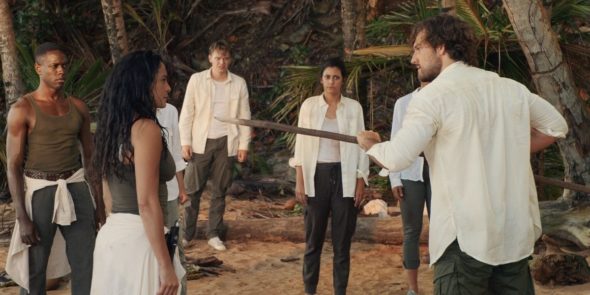 Are you trying to forget the first season of The I-Land TV show on Netflix? Usually, the Nielsen ratings play a big role in determining whether TV shows are cancelled or renewed. Netflix and other streaming platforms, however, collect their own data. Still, many viewers are frustrated their opinions weren’t considered, before it’s decided that shows like The I-Land won’t get a second season. If you’ve been watching this TV series, we’d love to know how you feel about the first (and only) season of The I-Land. We invite you to rate the episodes for us here.

A Netflix sci-fi thriller, The I-Land stars Kate Bosworth, Natalie Martinez, Ronald Peet, Kyle Schmid, Gilles Geary, Sibylla Deen, Anthony Lee Medina, Kota Eberhardt, Michelle Veintimilla and Alex Pettyfer. The series follows a group of 10 people who wake up on a treacherous island. With no memory of who they are or how they got there, the castaways set off on a trek to try to find a way back home — wherever that is. The 10 soon discover that this world is not as it seems. Faced with the island’s extreme psychological and physical challenges, they must rise to their better selves — or die as their worst ones..

What do you think? Which season one episodes of The I-Land TV series do you rate as wonderful, terrible, or somewhere between? Should Netflix have ended or renewed The I-Land for a second season? Don’t forget to vote, and share your thoughts, below.

Considering Bonnie and Clyde mention the group must find their way to the second island, I think Netflix should make a second season. It’s unreasonable for them to continually make these cliff hanging miniseries. It’s distasteful and will eventually lose them business to competitors that actually satisfy your closure needs. The I-Land is probably one of the best series Netflix has released in the last several years. A lot of the series they have recently released are apocalyptic or post apocalyptic or related to infection or zombies, which at this is point is OVER DONE. I’ve watched several of these… Read more »