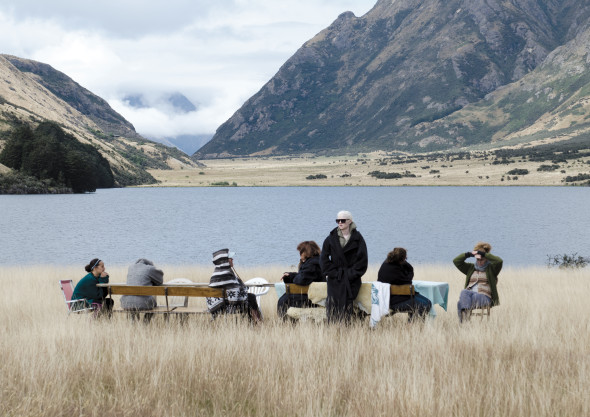 Did you think the Top of the Lake TV series was cancelled? Did you think it was a mini-series that had ended? Well, even though the first season finale aired in 2013, the SundanceTV drama is returning for a second season in 2017. Production has just begun. Elisabeth Moss is reprising her role, and Gwendoline Christie is joining the series.

Season two of Top of the Lake: China Girl picks up four years after the first installment. Sundance says, “When the unidentified body of an Asian girl washes up on to Sydney’s Bondi Beach, the case seems hopeless, until detective Robin Griffin discovers that China Girl didn’t die alone.”  Also joining the cast are David Dencik, Alice Englert, and Ewen Leslie.

Get more details, from this SundanceTV press release:

CRITICALLY ACCLAIMED MINI SERIES WILL BE PRODUCED BY SEE-SAW FILMS FOR BBC TWO IN CO-PRODUCTION WITH AUSTRALIA’S BBC FIRST AND FOXTEL, AND SUNDANCE TV IN THE U.S.

LOS ANGELES, CA – March 21, 2016 – Elisabeth Moss (TRUTH, Mad Men) is reprising her Golden Globe® winning role in BBC and See-Saw Films’ second series of the Emmy® and Golden Globe® nominated ‘Top of the Lake,’ and will be joined by Gwendoline Christie (Game of Thrones, STAR WARS: THE FORCE AWAKENS), it was announced by See-Saw Films’ COO, Television Hakan Kousetta and Head of Television, Jamie Laurenson.

Elisabeth Moss said, “I’m so excited to be back in Australia working with Jane on exploring this wonderful character. I can’t wait for audiences to see where we take Robin’s journey!”

Gwendoline Christie, who will have a major role in the mini-series, added, “I am so delighted to be working on ‘Top of the Lake’ 2. Jane Campion has been a major creative influence throughout my life and I could not feel more privileged to be working on the next installment of her unique and enthralling drama, alongside the brilliant Elisabeth Moss.”

The critically acclaimed mini-series will once again be directed by Oscar® winner Jane Campion (BRIGHT STAR, THE PIANO), along with new co-director Ariel Kleiman (PARTISAN). Campion and Gerard Lee also return as co-writers of the second season. ‘Top of the Lake’ is being produced by Philippa Campbell (RAIN, ‘Top of the Lake’ season 1) and Libby Sharpe (JEWBOY). Executive producers are Campion with See-Saw’s Emile Sherman, Iain Canning (THE KING’S SPEECH, SHAME) and Jamie Laurenson, alongside Lucy Richer for the BBC.

‘Top of the Lake’ season 2 is produced by See-Saw Films for BBC Two in co-production with SundanceTV in the U.S., BBC First and Foxtel in Australia, and in association with Hulu in the U.S., ARTE in France and BBC Worldwide.

The series will premiere on BBC Two in the UK in 2017 with six one-hour episodes. SundanceTV will have the exclusive U.S. premiere of all episodes of season 2 on its network in 2017. Hulu and Sundance will have VOD day after air, and Hulu will have the exclusive subscription streaming rights to the entire series in the U.S. BBC First will broadcast in Australia on pay TV platform Foxtel. BBC UKTV will screen the series in New Zealand. Arte is also back on board and will air the series in France.

‘Top of the Lake’ Season 2: China Girl is a crime mystery story that begins four years on from the explosive ending of Season 1. When the unidentified body of an Asian girl washes up on to Sydney’s Bondi Beach, the case seems hopeless, until detective Robin Griffin discovers that China Girl didn’t die alone.

“Jane and Gerard are great modern storytelling-adventurers. The daring way they crack open vivid layers of humanity to explore the mysteries at the heart of a new wilderness in Season 2 has attracted an extraordinary team on and off screen. It’s an honour to produce this unique and ground-breaking show,” said producers Philippa Campbell and Libby Sharpe.

“Jane’s vision and passion for this story is compelling, daring and honest. We believe Season 2 will continue to thrill and enthrall audiences worldwide. The fact that we have been able to bring back broadcast partners from different corners of the world is a testament to the quality of the show and Jane’s extraordinary talent. We are delighted that our previous partners on Series 1 did not hesitate to board the second series to help bring to the world this stand out drama,” said Jamie Laurenson and Hakan Kousetta from See-Saw Films.

“We jumped at the chance to reunite with See-Saw on a second installment of ‘Top of the Lake,’ one of television’s most powerful dramas of the past decade and a show that helped establish SundanceTV as a key destination for high-quality original series,” said Joel Stillerman, president of original programming and development for AMC and SundanceTV. “We’re extremely excited to have Elisabeth Moss and Gwendoline Christie headlining this incredible piece of storytelling from Jane Campion and Gerard Lee, and we look forward to having ‘Top of the Lake’ season 2 continue the strong momentum at SundanceTV.”

Lucy Richer, BBC Executive Producer said, “Jane Campion is one of the world’s finest directors and we are incredibly proud to bring her unique voice and vision to BBC TWO for the stand-alone second series of ‘Top of the Lake.’ The astounding cast she has brought together will star in a dark and beguiling story that takes Detective Robin Griffin deep into the underworld of Sydney, and to the limits of her own heart.”
Shooting commenced March 21 on location in Sydney, Australia.

BBC Worldwide is handling international sales of the series. Chris Rice of WME, See-Saw’s Kousetta and Laura Andrews at BBC Worldwide North America negotiated the deals with SundanceTV and Hulu for season 2 in the U.S.

The first season of ‘Top of the Lake’ won the 2013 Emmy® for Outstanding Cinematography for a Mini-series or Movie, as well as the 2014 Golden Globe® for Best Performance by an Actress in a Mini-Series or a Motion Picture Made for Television for Moss. ‘Top of the Lake’ also received recognition at the 2014 BAFTAs, Screen Actors Guild Awards, Critics Choice Television Awards, PGA Awards, among many others.

In addition to her Golden Globe® for ‘Top of the Lake’, Elisabeth Moss was nominated six times for an Emmy® Award for her role as Peggy Olson in the critically acclaimed and award-winning television series ‘Mad Men.’ Her feature film credits include TRUTH starring Cate Blanchett and Robert Redford, Alex Ross Perry’s films QUEEN OF EARTH and LISTEN UP PHILLIP and THE ONE I LOVE with Mark Duplass. She will next be seen in Ben Wheatley’s HIGH-RISE starring Tom Hiddleston, and has completed work on THE FREE WORLD with Boyd Holbrook, THE SEAGULL with Annette Bening, THE BLEEDER with Liev Schreiber and MAD TO BE NORMAL with David Tennant.

Gwendoline Christie was most recently seen in STAR WARS: THE FORCE AWAKENS and will reprise her role as Captain Phasma in STAR WARS: EPISODE VIII currently in production. Other credits include THE HUNGER GAMES: MOCKINGJAY PART 1 and 2. She will next appear on the small screen in the new series of ‘Game of Thrones’ and on the big screen in Fox Searchlight Pictures’ ABSOLUTELY FABULOUS.

Jane Campion won the Oscar® for Best Screenplay for THE PIANO starring Holly Hunter. Her other credits include BRIGHT STAR starring Abbie Cornish and Ben Whishaw, IN THE CUT starring Meg Ryan and Mark Ruffalo, HOLY SMOKE starring Kate Winslet and Harvey Keitel and THE PORTRAIT OF A LADY starring Nicole Kidman and John Malkovich.

The television division formally started in 2012 and kicked off with the multi-award winning first season of ‘Top of the Lake’ – the same year Jamie Laurenson joined from BBC Films. Hakan Kousetta joined in 2015 as COO and the first production under their joint stewardship, the mini-series ‘Love, Nina’, delivers to the BBC1 in spring 2016. Written by 2016 Academy Award nominee Nick Hornby the comedy-drama stars Helena Bonham Carter and is based on the best-selling novel by Nina Stibbe. It was selected for the Berlinale Special Series programme at this year’s Berlin Film Festival.

Since its launch in 1996, SundanceTV has remained true to founder Robert Redford’s mission to celebrate creativity and distinctive storytelling through unique voices and narratives found in the best independent films. From delivering critically acclaimed Emmy®, Golden Globe® and Peabody Award-winning television featuring some of the world’s most talented creators and performers, to showcasing some of the most compelling and iconic films across genres and generations, SundanceTV is a smart and thought-provoking entertainment destination. SundanceTV is owned and operated by AMC Networks Inc.; its sister networks include AMC, IFC, BBC America and WE tv. SundanceTV is available across all platforms, including on-air, online at www.sundance.tv, on demand and mobile.

Hulu is a premium streaming TV destination that offers hundreds of thousands of hours of the best of current season programming, premium original content, films and full seasons of hit series to subscribers with limited commercials for $7.99 per month or commercial free for $11.99 per month. Hulu is the only streaming subscription service that offers current season content from 5 of the 6 largest U.S. broadcast networks. Since its launch in 2008, Hulu has been at the forefront of entertainment and technology and continues to redefine TV by connecting viewers with the stories they love.

Born of a Franco-German partnership in 1991, ARTE is non-commercial and receives 95% of its funding from TV license fees in both countries. ARTE is made up of three units: ARTE GEIE, the headquarters in Strasbourg is responsible for programming and transmission, while the French and German members, ARTE France in Paris and ARTE Deutschland in Baden Baden, provide most of the programmes.

Creating a television channel for two audiences was a first in television history and is still an exception in the global TV market today. Since its creation, ARTE has been committed to cultural diversity and multilingualism, convinced that better circulation of European broadcast content can make a considerable contribution to European cultural integration.

What do you think? Did you watch the first season of the Top of the Lake TV show? Do you plan to watch the second? Let us know.

I’m very happy to see that Elisabeth Moss, is returning… She is a fantastic actress, her intensify in this shows first season, would have the same affect on ppl if she wasn’t going to be in season 2.. The rawness that this show was presenting was incredible, raw, and this is the way life n realities can actually play out just about n e where in the world… I hope that the producer, creative writers, continue to keep ppl on the edge, with the taboo subject the first season was so up in our face, raw and very real.. I… Read more »