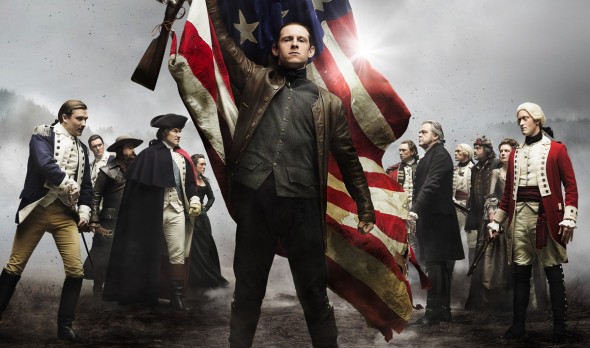 AMC has renewed their historical drama Turn: Washington’s Spies for a third season of 10 episodes.

It was suspected that the series might be cancelled because the ratings for season two were down about 45% when compared to those of the first season.

AMC CONTINUES THE REVOLUTION WITH A THIRD SEASON OF “TURN: WASHINGTON’S SPIES”

NEW YORK, NY – July 15, 2015 – AMC today announced that “TURN: Washington’s Spies” has been renewed for a third season of 10 episodes to air in 2016. The Revolutionary War period drama delivered an average of 1.6 million viewers in its second season and helped open up a new night of original programming for AMC on Monday, along with “Better Call Saul” and “The Making of The Mob: New York.”

“We loved what we saw creatively from the ‘TURN: Washington’s Spies’ team in season two, and the show achieved something that is increasingly rare in television today – a growing audience during the season,” said Charlie Collier, president of AMC and SundanceTV. “‘TURN’ continues to attract a dedicated and distinctively upscale audience across multiple platforms, and it has carved out a meaningful space in AMC’s ‘eclectic by design’ programming palette. We look forward to working with Craig Silverstein, Barry Josephson, the expanded cast and entire ‘TURN’ team on season three.”

“TURN: Washington’s Spies” ranks as the third most affluent scripted drama among adults 18-49 and adults 25-54 on ad-supported television in the 2014-2015 season, behind only AMC’s “Mad Men” and FX’s “The Americans.” Among the affluent audience, season two of “TURN: Washington’s Spies” was up 20% among adults 18-49 and 19% among adults 25-54 versus season one. The show’s second season also saw a significant increase in TVE with 1.2 million total views – double the number from season one (554,000).

The show’s social media community has also seen growth, increasing its Twitter followers during season 2 by 70% over last season and its Facebook followers by 26%, with a significant spike in social conversation in mid-June around a fan-led #RenewTURN Twitter campaign.

Season two of “TURN: Washington’s Spies” has achieved very favorable audience scores on both Rotten Tomatoes (97%) and IMDb (8.0 out of 10), and also drew critical praise, including this small sampling of reactions to the series:

· “As lavish and well-acted as ever and promising more intricate intrigues.” -Neil Genzlinger, The New York Times

· “Newcomers to the series… can just let the pleasures of this handsome and well-acted period piece wash over them.” -Nancy Dewolf Smith, Wall Street Journal

Source: Nielsen. Live +7 (9/22/14- 6/14/15) Rank excludes – reality, encores, specials & nets with HH UE < 60M, 2+ TC., TURN S1 vs. S2; HHI $100K+ % comp. About AMC Whether commemorating favorite films from every genre and decade, or creating acclaimed original programming, AMC brings to its audience something deeper, something richer, Something More. The network reigns as the only cable network in history ever to win the Emmy(R) Award for Outstanding Drama Series four years in a row with "Mad Men," and six of the last seven with current back-to-back honoree, "Breaking Bad." The network boasts the most-watched drama series in basic cable history and the number one show on television among adults 18-49 for the last three years with "The Walking Dead." AMC's current original drama series include "Mad Men," "The Walking Dead," "Better Call Saul," "Hell on Wheels," "TURN: Washington's Spies," "Halt and Catch Fire," "Humans," and the forthcoming "Fear the Walking Dead," "Into the Badlands" and "The Night Manager." AMC also explores authentic worlds and discussion with original shows like "Talking Dead," "The Making of The Mob: New York" and "Comic Book Men." AMC is owned and operated by AMC Networks Inc. and its sister networks include IFC, SundanceTV, BBC America and WE tv. AMC is available across all platforms, including on-air, online, on demand and mobile. AMC: Something More.

What do you think? Do you like the Turn TV series? Are you glad that it’s coming back for a third season or, do you think AMC should have cancelled it instead?

I love this show. Not too many shows left that I actually want to watch but this is one for sure

We love this series and never miss an episode ! Just wish there were more of them. They teach and remind us so much about our countries history !!
Please don’t cancel the show !!!!!!!

Any program that introduces people to American History should be given a change. Some liberties have been taken, but the basic story is based in fact. Besides, we at least have to get to Yorktown. I also enjoy spotting the areas around Williamsburg where it is filmed.

My husband and I love the show. We never miss an episode! Very informative
and great history lesson. Renew renew renew!

Great show. Historical and entertaining at the same time! My family enjoys it as well.