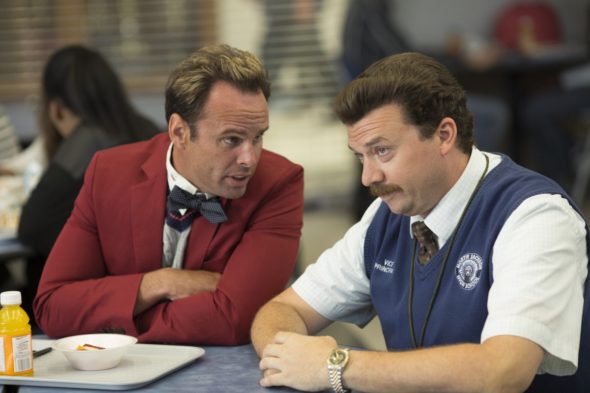 Will either Neal or Lee prevail? Has the Vice Principals TV show been cancelled or renewed for a third season on HBO? The television vulture is watching all the latest cancellation and renewal news, so this page is the place to track the status of Vice Principals season three. Bookmark it, or subscribe for the latest updates. Remember, the television vulture is watching your shows. Are you?

Airing on the HBO premium channel, Vice Principals stars McBride as Neal Gamby and Walton Goggins as Lee Russell. The HBO cast also includes Kimberly Hebert Gregory, Georgia King, Busy Philipps, Shea Whigham, and Sheaun McKinney. Both Gamby and Russell want to be the next North Jackson High School Principal. Although they hate one another, they team up to oust Dr. Belinda Brown (Hebert Gregory).

The second season of Vice Principals averaged a 0.29 rating in the 18-49 demographic and 698,000 viewers. Compared to season one, that’s down by 21% and down by 11%, respectively. Learn how Vice Principals stacks up against the other HBO TV shows.

Fans don’t have to worry whether HBO’s Vice Principals is cancelled or renewed for season three, but only because star Danny McBride — who created the comedy with Jody Hill — has long said it was conceived as a two season TV series. Because ratings influence the chance of a spin-off or sequel series, I’ll still keep an eye on the Nielsens and update this page with any breaking developments. Subscribe for free updates on any Vice Principals cancellation or renewal news.

What do you think? Is the Vice Principals TV show ending at the right time? If it were up to you, would it be cancelled or renewed for season three on HBO?

4 Comments
Inline Feedbacks
View all comments
Get over it

It was a great short show

The show was awesome. Everything that Danny McBride and Jody Hill are in is great. Nothing like some good comic relief these days!!

I know this was only supposed to be a 2 season arc, but Eastbound and Down was supposed to end at 3 seasons and season 4 was great! I really hope we get a 3rd season of VPs, because the thought of a Stevie/Kenny Powers reunion teased at the end of Season 2 is a missed opportunity!

Please continue show! My boys and I LOVE it!!!