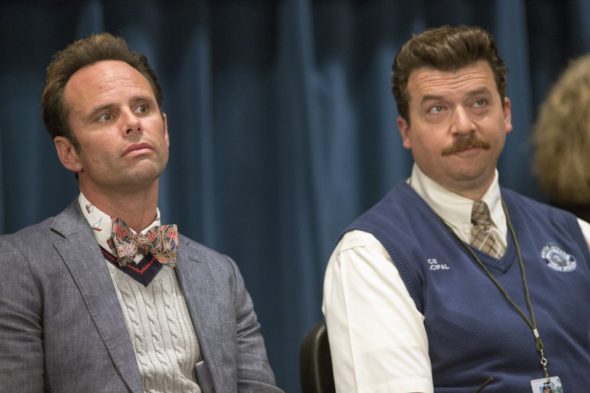 “Stop putting food in your face.” Today, HBO released a new clip from the season two premiere of Vice Principals.

The dark comedy revolves around a pair of high school administrators (Danny McBride and Walton Goggins). Each believes that he should be the Principal of North Jackson High School. The hate one another but decide to work together to oust the school’s new principal (Kimberly Hebert Gregory). The rest of the cast includes Georgia King, Busy Philipps, Shea Whigham, and Sheaun McKinney.

The second and final season of Vice Principals premieres on HBO on September 17th at 10:30 p.m. ET/PT.

Check out the new preview and read more details below:

As the tumultuous school year at North Jackson High continues, a new semester brings big changes — and Gamby and Russell are about to learn that the only thing harder than gaining power is holding on to it.

The darkest comedy on television returns to finish what was started when VICE PRINCIPALS kicks off its nine-episode, second and final season SUNDAY, SEPT. 17 (10:30–11:00 p.m. ET/PT), with other new episodes debuting subsequent Sundays, exclusively on HBO.

Danny McBride (HBO’s “Eastbound & Down”; “This Is the End”) stars as Neal Gamby and Walton Goggins (Emmy® nominee for “Justified”; “Six”) stars as Lee Russell in the show, which was created by McBride and Jody Hill and shot in and around Charleston, South Carolina.

Guest stars on the second season include Fisher Stevens (“The Grand Budapest Hotel”) as a scholarly rival to Gamby for Amanda’s attentions; Scott Caan (“Hawaii 5–0”) as a teambuilding trainer; Maya Love as Gamby’s daughter, Janelle; and Susan Park (“Fargo”) as Russell’s wife, Christine.

What do you think? Have you seen Vice Principals? Will you watch season two?