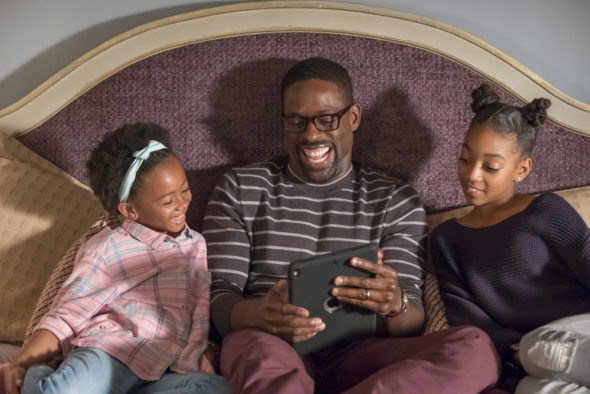 Faithe Herman as Annie, Sterling K. Brown as Randall, Eris Baker as Tess in This Is Us on NBC. (Ron Batzdorff / NBC)

The Peacock Network has made it clear there is a standing offer to revive the political drama, and Sorkin admits he does think about doing so. Right now, if he had to cast a new President of the United States in The West Wing, he’d choose Sterling K. Brown (pictured above), who currently stars as Randall Pearson, on NBC’s hit family drama, This Is Us. Sorkin has already thought of a way to utilize a retired President Jed Bartlet (Sheen), but it’s less clear to him how he’d tie in favorites like CJ Cregg (Janney) and Josh Lyman (Whitford).

There’s also a standing offer from the same network to reboot The West Wing, which Sorkin considers on occasion. When asked if he’d introduce a Trump-like figure in his fictional White House, he winces, arguing that the current president holds no appeal for him, fictional or otherwise. “Trump is exactly what he looks like: a really dumb guy with an observable psychiatric disorder,” he says. Sorkin’s preferred scenario, he tells me, would involve “Sterling K. Brown as the president, and there’s some kind of jam, an emergency, a very delicate situation involving the threat of war or something, and [President] Bartlet [played by Martin Sheen], long since retired, is consulted in the way that Bill Clinton used to consult with Nixon.” How he brings Allison Janney’s C.J. Cregg or Bradley Whitford’s Josh Lyman into the new scenario is where Sorkin gets stuck. So, for the time being, fans will have to settle for reruns.

In the THR article, the caption for a photo of The West Wing cast and producers also quotes Sorkin as saying, “If I could think of a way of [reviving The West Wing] without it seeming like a Brady Bunch reunion, I would.” Let’s help him out!

What do you think? Has the time come for a West Wing TV series reunion? Who would you cast as the next president in the NBC TV show? How would you bring back your favorite characters from the original cast? Let us know, below.

I’m watching the series for at least the 5th time. It’s as fresh today as it was 20 years ago. I would love to see a sequel. Charley is POTUS, of course.

With this being Scandals final season, I say bring back the West Wing!!!

The original run of The West Wing got me through the Bush Jr. years, and we need this show even more now than we did then. Please, Aaron, if you’re reading this, find a way to make this happen!!