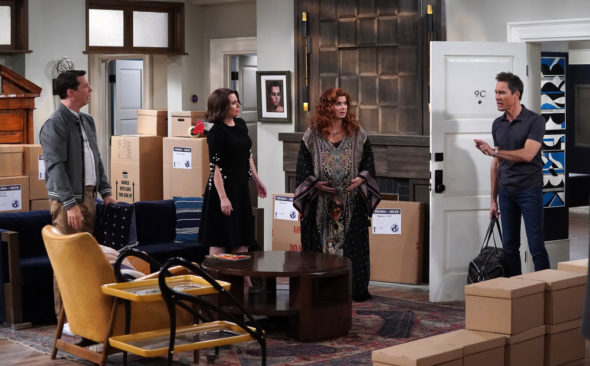 Will & Grace is done for a second time, but some questions were left unanswered. Fans still don’t know the father of Grace’s baby is or who Karen’s husband is, and there are reasons for that, according to the executive producers of the series.

Max Mutchnick said the following about the identity of the baby daddy, per Deadline:

“It’s not one of those guys that you met [earlier in the season]. There’s a backstory that we’re not going to share. Something else happened. It wasn’t an immaculate conception but she did leave out one person she was with in Europe and that’s who the father is. There was a scheduling issue that made it impossible to happen. The father of the child exists. We had decided creatively that a past lover of hers was the father and she saw him in Europe.”

As for Karen’s husband, the men agreed they wanted someone epic, if he ever appeared on-screen, but that never happened. Mutchnick said the following about the Stan character on the NBC comedy:

“There was a high-ranking writer on the staff who very much wanted Stan to make an appearance the finale. Speaking for myself, I never wanted to do it unless it was Marlon Brando or Robert Redford, a spectacular person that played Stan. I don’t think there was ever a way to pull it off and why blow it at the end. I’m really glad we never did it.”

As for the future, will fans ever see Will & Grace on-screen again? No. Mutchnick revealed this is truly the end of comedy. He said the following:

What do you think? Were you happy with the end of Will & Grace the second time around?

Another show that had so much more life in it.

Will and Grace was best program ever. I had tears when Will closed door on empty apartment, This definitely should not be the last season. However you could eliminate Jacks husband. Could not understand one word he said

This can’t be the ending. I have followed this show both times it aired. I didn’t even realize this was the final episode till the special came on after.
It leaves to much open. We need to see them finally happy and satisfied with their lives.
Even a jump ahead would have been great. Seeing them old and the kids best friends.
I don’t know about everyone else but I need more.

I think that they left it open-ended for a reason. First, not to have a repeat of the original series ending where basically their entire lives would be spelled out, done and over with, so to speak. In the original timeline, not quite enough time has passed (it being 2020) for all of the original events to have happened, therefore, an explanation, as in the first episode of the reboot, had to happen, which, in my opinion, disregarded the entire last season of W&G. Second, the ending leaves questions to be answered, thus leaving a reboot of the reboot (a… Read more »

It’s a good show, minus the jokes about Trump, which I feel is why they got canned.

The ending felt like a part 1 to a 2 part episode but not having a detailed ending allows us fans to create our own conclusion or live on in our own ideas. Let us decide the babys father, let stan be marlon brando, have jack become s mega star. I felt the reboot seasons lacked alot of good writing anyway, kept dropping story lines, trying to bring back guest stars from the original episodes only to give them a brief cameo. We needed more of jack coming to terms with being a grandfather, more W&G DESIGNS, and how that… Read more »

This show is so awesome, and deserved a better ending, seeing how Will & Grace handle being parents would have been hilarious! At least knowing who the father was! Sad to see this show end, loved the characters so much!

at the the end of the episode they should of jumped maybe a year into the future showing what everyone was doing, instead of just ending it like that.

One thing I’ve learned watching Hollywood for over 50yrs..NEVER say never. My money’s on them coming back..maybe not as a series but as a reunion movie in 5yrs or so. Just wait & watch!

I didn’t care for how this ended. The 1st Series Finale was awesome and tied up all the loose ends. Since they knew they were going to end this show again, the last episodes should have been more focused on tying up all the loose ends and answering any questions that were left, such as who the real father of Grace’s baby was. It is very frustrating and unfair to the fans, to leave so many unanswered questions hanging when there is no hope of the show returning or a final tv movie episode to finish clearing everything up. It… Read more »