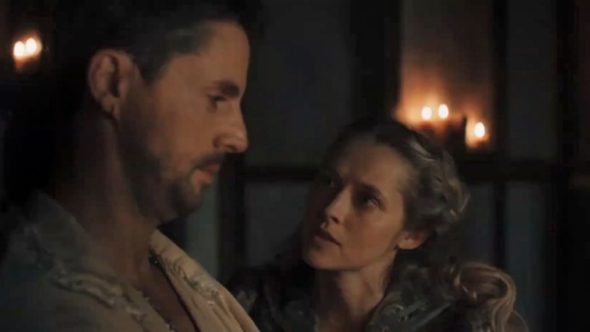 A Discovery of Witches is now coming to AMC. Season two was released earlier this year on Sundance Now and Shudder but this will be the second season’s premiere on a traditional U.S. cable channel. The series was given a two-season renewal in 2018, but its return was delayed due to the pandemic. It is not known when season three will arrive.

AMC revealed more about season two of A Discovery of Witches in a press release.

“AMC announced today that A Discovery of Witches season two begins its network television encore on AMC with the first two episodes airing back-to-back on Sunday, June 27 at 7 pm ET/ 6c. Subsequent episodes will air weekly on Sundays at 8pm ET/7c on AMC. After a successful run on AMC’s streaming services Sundance Now and Shudder earlier this year, the second season of A Discovery of Witches is still available to binge on our streaming platforms.

“A Discovery of Witches is an addictive, fantasy-filled series which has become a top performer across our SVODs, and we’re thrilled to introduce the show to a wider audience by giving viewers the opportunity to sample it with a traditional linear viewing experience or indulge in binging the series on our streaming platforms,” said Dan McDermott, President of Original Programming of AMC Networks.

Adapted from Deborah Harkness’ All Souls trilogy, the 10-part second season finds Diana (Teresa Palmer, Hacksaw Ridge) and Matthew (Matthew Goode, Downton Abbey) hiding in time in the fascinating and treacherous world of Elizabethan London. Here they must find a powerful witch teacher to help Diana control her magic and search for the elusive Book of Life.

Back in present day, Diana’s beloved aunts, Sarah (Alex Kingston, Doctor Who, ER) and Em (Valarie Pettiford, Half & Half), must take shelter with notorious witch hunter Ysabeau de Clermont (Lindsay Duncan, The Honourable Woman) at her ancestral home, Sept-Tours. Meanwhile, in Oxford, Marcus (Edward Bluemel, Killing Eve) and Miriam (Aiysha Hart, Line of Duty) take on Matthew’s mantle to protect daemons Nathaniel (Daniel Ezra, All American) and Sophie (Aisling Loftus, War & Peace), whose pregnancy is advancing. And Gerbert (Trevor Eve, Waking the Dead), Knox (Owen Teale, Game of Thrones), Satu (Malin Buska, The Girl King) and Domenico (Gregg Chillin, Da Vinci’s Demons) are determined to hunt down every clue they can to Diana’s and Matthew’s disappearance, and the secrets their allies are keeping from them.

Check out a trailer for the season below.

What do you think? Do you plan to watch A Discovery of Witches on AMC next month?

Yes I will watch this series. I love it very much. Just sad that Season 3 will only havec7 episodes. IMO they have rushed this season. It is somewhat disappointing so far.

Please send me a reminder. It is a great show love it