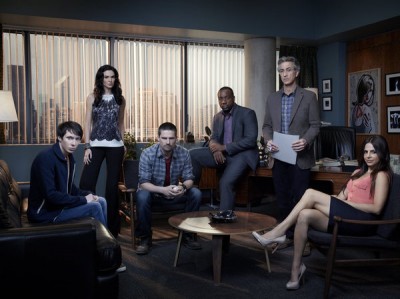 TV show description:
In this TV show, five ordinary people are brought together to form one extraordinary team of Alphas. They have the unique power to stretch the capabilities of the human mind which gives them superhuman physical and mental abilities — Alpha Skills. They operate within the Defense Criminal Investigation Service of the U.S. Department of Defense and investigate cases that point to others using Alpha abilities for questionable or illegal reasons.

The team is led by preeminent neurologist and psychiatrist Doctor Lee Rosen (David Strathairn). He has a long history of working with patients suffering from neurological disorders. Though not an Alpha himself, Doctor Rosen has become the unconventional leader of the team and his nurturing personality and fatherly wisdom are instrumental in holding the group together — particularly when stresses and personality conflicts threaten to tear them apart.

A former FBI agent, Bill Harken (Malik Yoba) adheres strictly to procedure and protocol. He’s also a hyperadrenal Alpha who’s able to summon amazing strength by consciously activating the “fight-or-flight” response. With a flood of adrenaline, pain receptors are subdued and for a short bursts of time, he experiences super-human strength and a resistance to harm that borders on invulnerability.

Cameron Hicks (Warren Christie) has lived a hard life and the scars are evident in his personality. His run-ins with the law and the medical and military establishment have created a deep sense of distrust in authority. A former Army sniper and minor league baseball pitcher, Hicks has an unusual condition called “hyperkinesis.” His mind’s imaging systems and muscle control are perfectly in tune with the motor skills center of his brain. As a result he possesses flawless aim, perfect balance, and greatly enhanced motor skills.

Nina Theroux (Laura Mennell) is many things — worldly and sophisticated, attractive and intelligent, complex and manipulative. Her Alpha skill is called “influencing” and it involves the disruption of specific neural pathways in the cerebral cortex that leave the brain vulnerable to suggestion. It’s Nina’s curse to know that those aware of her ability, can’t distinguish if she’s being genuine or if she’s controlling them.

Gary Bell (Ryan Cartwright) is in his twenties and is sensitive to many factors of his environment. Dependent on a rigorous routine, Gary is also a “transducer” — otherwise known as a human antennae. His neural synapses have the ability to “read” a wide range of frequencies including television, radio, and cell phone signals. Gary’s Alpha skill allows him to intercept communications and encrypted messages but it can also be overwhelming for him when he’s unable to turn the signals off.

And finally, Rachel Pizad (Azita Ghanizada) is a pretty, timid girl in her early twenties. She’s been sheltered from society by her protective parents. Rachel is a “synesthete” and this allows her to enhance one sense while rendering her remaining senses temporarily useless. This often leaves her vulnerable to danger.

Series Finale:
Episode #24 — God’s Eye
Wounded but determined, Dr. Rosen struggles across town, urged on by hallucinations of his dead daughter Dani. In order to stop the bleeding, Dr. Rosen visits an Alpha who can help and then forces himself to keep moving. All he has to go on is the clue he got from Mitchell: That Parish wants to watch the explosions with a “God’s eye view.”

With time running out, Dr. Rosen visits Gary at the hospital where he is taking care of his mother. Gary finds out that Parish was responsible for construction of the Empire State Building and Dr. Rosen thinks this must be the God’s eye view Parish mentioned. He jumps on a train and plans to transfer at Grand Central Station.

Back at the office, tensions are high. Bill is concerned about Dr. Rosen but he won’t allow that concern to override his main priority: Stopping Parish’s imminent attack. Meanwhile, Kat is still livid that the Alpha team put her in harms way—a fact that makes it hard to focus on the matters at hand.

Deep underground, a few electrical works accidentally trigger an explosion. The workers die instantly but a homeless man finds that the explosion has turned his voice into a weapon. Rachel uses her senses and discovers that the “surge protectors” the government just installed all over the country are actually miniature photic stimulators. After consulting with Skylar, Agent Cley and Bill agree to do the only thing they can: Shut down the power to the national grid. Unfortunately, that solution won’t work in NYC. Skylar will have to build a work-around.

At Alpha Headquarters, Skylar’s new device does indeed kill the power in New York City but Grand Central Station has a separate generator to keep the trains running—Gary and Dr. Rosen are right in the belly of the beast! Worried, the rest of the team rushes to Grand Central to help. Parish, however, has anticipated this and set a trap for them. Bill and Kat take the Red Flag terrorists down while Rachel and Skylar attack the generator. Elsewhere, Dr. Rosen confronts Stanton Parish but refuses to kill him. Cameron, however, has no such compunction: He shoots Parish, killing him—at least for the moment.

Skylar hits a snag with the generator. She’s able to shut down power to the rest of New York but she can’t cut the power to Grand Central. In the following explosion, everyone falls to the ground, Alphas and humans alike, except for Gary who was somehow unaffected. Is the whole team dead, or will they awake with even stronger Alpha powers?
First aired: October 22, 2012.

My son introduced me to the show Alphas on Netflix and I watched Season 1 and 2 in 2 weekends thought the show was amazing. I was hooked and couldn’t stop watching the show, so imagine my surprise when I saw that there is no season 3. Please bring this show back awesome cast, great writing and storyline, please bring the show back!!! Love the character Gary Bell. I need Alpha season 3!!!!!!!!

At the suggestion of a friend I watched her DVDs of the show. My husband & I became immediately hooked. Only to find out that there will be no season 3′. Clearly, the problem is not with the show, it was on the wrong network. Someone has to see this was a bad PR problem. Zac has to find away to put his show somewhere else. The show is great, just not advertised correctly.

Started slow but season 2 was awesome. Sad to see it go. After season 2 it got as good or better than Heros. Syfy made a mistake.

too bad. like i said in another review, if they ended the shows properly it wouldn’t be so bad. good show. interesting

This is a great show. I was looking forward to watching season 3. Please do not cancel.

Syfy have made a poor decision in cancelling Alphas. why do networks cancel shows that have an audience in the UK? I was really looking forward to series 3 as well. Syfy you suck.

i hate the fact this show was canceled, just goes to show reality and wrestling shows once again rule syfy. the very sad thing is it was filmed in Toronto ontario., it is too bad Space channel could not see if they could save the show..

as for the season finale of series 2 it was kinda a hard corner to create a season 3 after pretty much killing every cast member except 1. so in a way it was a final episode feeling

Alphas don’t die from that. It just knocked the out.

I like those ‘far out there ‘ shows. As we humans evolve through the years, it’s all the possibility’s of situations that could happen in the future. I hope to see more of it.

I love this show. Please do not cancel this show.

This is a great show and I wanna see more ! Do not cancel this series !

I love this show ! It is the only thing I watch on syfy. Pls. Renew I would love a season 3 as I am sure others feel the same

I love this show and am on the edge if my seat to see if there will be a 3rd season! When will we know?

[…] TV show’s ratings are the best way to tell if Alphas will be cancelled or renewed for a third season. The second season of Syfy’s Alphas airs […]

Not a show of substance. After watching it twice it should have been on the cancellation list.

[…] good folks at Syfy want to remind us about the upcoming second season premiere of Alphas — on Monday, July 23rd. In addition, they wanted to let you know about some of the guest […]