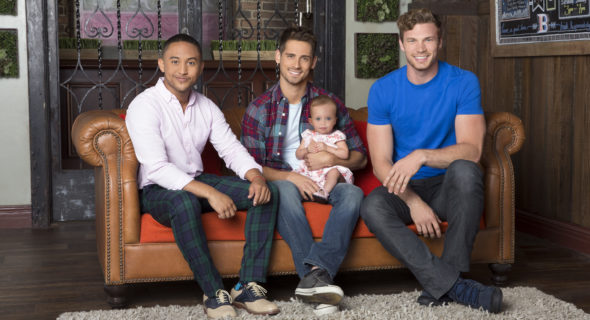 Last year, Freeform renewed Baby Daddy for a sixth season, even though ratings had dropped yet again, and there are already plenty of episodes for a syndication package. With Pretty Little Liars and Switched at Birth ending, will Baby Daddy be cancelled or renewed for a seventh season? Stay tuned.

The Baby Daddy TV show stars Jean-Luc Bilodeau, Tahj Mowry, Derek Theler, Melissa Peterman, Chelsea Kane, Sura Harris, and Kayleigh Harris. This Freeform sitcom centers on Ben Wheeler (Bilodeau). After his one-night-stand, Angela (Mimi Gianopulos), leaves their baby on his doorstep. Ben decides to raise the child with the help of his family and friends. In season six, Ben is still searching for the mysterious Elle. Danny (Theler) and Riley (Kane) are on the hunt for a doctor to help with the pregnancy, and Bonnie (Peterman) wants to be involved. Tucker (Mowry) is back from Los Angeles, but he refuses to tell anyone what happened while he was there.

What do you think? Do you like the Baby Daddy TV series? Do you think it should be cancelled or renewed for a seventh season on Freeform?

This is one of the only current sitcoms that is actually comical. Not sure why it would be canceled when plenty of stupid reality shows keep getting renewed *cough* kardashians *cough*. Really. No reason to cancel something that is for once decent to watch with a ton of unpredictable humor. Plus little Emma is the sweetest thing! Makes me want another baby.

Please dont cancel baby daddy it. Means the world to me and my son!!! we watch it together.. if it comes to and end we will be very sad and i dont know where our bound will go

DON’T cancel this show pleaseeeeee they are already canceling all shows. It’s the best show, like the fosters why??????

Love this show. Bring it back. There’s so many new things that can still happen especially after tonight’s show.

Keep the show please! I love it. Not many reasons to watch tv anymore. I wait every week. They are an amazing cast and keep me laughing. Love love love this show!!

I love the show!!!!!! I die every episode I hope it keeps going forever