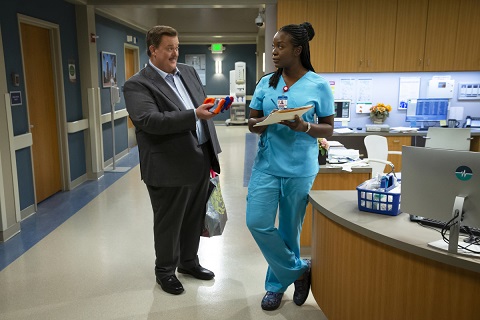 “A woman of your age cannot be picky.” CBS just released a sneak peek at their new TV show from Chuck Lorre, Bob ♥ Abishola.

From award-winning creator, executive producer and writer Chuck Lorre, BOB (HEARTS) ABISHOLA is a love story about a middle-aged compression sock businessman from Detroit who unexpectedly falls for his cardiac nurse, a Nigerian immigrant, while recovering from a heart attack and sets his sights on winning her over. Undaunted by Abishola’s (Folake Olowofoyeku) lack of initial interest or the vast differences in their backgrounds, Bob (Billy Gardell) is determined to win Abishola’s heart, in this comedic examination of immigrant life in America. Chuck Lorre, Eddie Gorodetsky, Al Higgins and Beth McCarthy-Miller (pilot only) are executive producers for Chuck Lorre Productions in association with Warner Bros. Television. McCarthy-Miller directed the pilot from a script by Lorre, Gorodetsky, Higgins and Gina Yashere.

What do you think? Are you a fan of Billy Gardell? Will you watch his new series?

OHHHH YESSSSSSSS….thanks God I found it on CBS free on demand….getting ready to watch it now ….its a GREAT show …besides Billy I love the reat of the cast they are perfect..nice seing the white guy from another show…the pot head…ahahahah
More ..more…more…more episodes keep up the laughter…affectionately dave

I watched 2 episodes of Bob loves Absholia and found it very funny and entertaining…I’m disappointed there are no further episodes….Billy Gardell is a fine comedian and the flavor of the show was endearing and I hope to see more
…….thanks David J Abramski
David Joseph Abramski…..on Facebook

Yes I will check out the show, Billy Gardell was very funny, in Mike and Molly.

I like Billy. I’ll give the show a shot