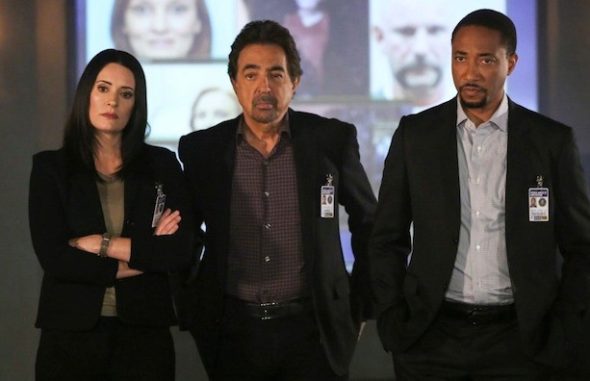 In the interview, Messer revealed season 13 of Criminal Minds will end with a cliffhanger:

We haven’t really been able to do anything like this, where an FBI agent has been missing, and then when he’s found, presumed dead, we see that he learned how to survive as a victim for over a year. This guy was trying to solve a case not with profiling skills but VICAP skills, and his almost-naivete got him caught, by serial killers.”

And what about a 14th season? Messer says she’s hoping CBS will renew Criminal Minds so the cliffhanger can be resolved during the show’s 300th episode:

There is no greater way to launch a season than to say ‘our 300th episode.’ Our show has been through the wringer so many times, and we have such a great, loyal fan base that has been with us throughout all of these changes, I would certainly hope that we get that opportunity, to celebrate 13 years of stories.”

Earlier, EP Harry Bring suggested CBS has already renewed the series, but CBS has yet to confirm.

What do you think? Do you watch Criminal Minds? Do you want a 14th season?

I have never missed a show! Please don’t cancel this program! And don’t kill off Penelope!

Please bring back the BAU for Season 14 (and beyond!). I’ve watched every episode from the beginning, and would hate to see it end!

I have watched Criminal Minds since the first season. Love the show and the characters. Will be so disappointed if show not renewed for season 14.

The season finale was one of the best shows seen and the cliffhanger fantastic. However, all through this season, having been a fan since Day #1, I begged to be put out of my misery and hoped that the show would end after this season. I loved the additions of Adam Rodriquez and Daniel Henney. But, there’s just something missing or downright boring about the show now. I think the cliffhanger was written that way so that the network and fans would want a season #14. But, to me, for what? One or two *good* episodes at the beginning of… Read more »

I have been a die-hard fan since the first season. I will sit down and watch seasons from beginning to end during off-seasons. And after the cliff-hanger fans were left with, not having a 14th season would just be cruel and unusual punishment…and since the show revolves around various areas of our criminal justice system, to violate one of our core fundamental rights would just be wrong…there are so many stories that have yet to be told and it would be a shame to end it now. I would like to see some cameo appearances from Shemar Moore though. I… Read more »

I have watched This show from the bvry beginning and would be sad to see the series end.

I love this show. I personally miss Hotch. I know he can’t come back but please keep the team.

Keep the show it’s awesome but bring back Gideon and shemar Moore.

Keep the show and bring back Gideon!!

Loveeeecthis show fur the character
de elopement of the cast over the years. Absolutely, a 14th season should happen. Can’t leave Spencer and Penelope in such dire straights!!!!