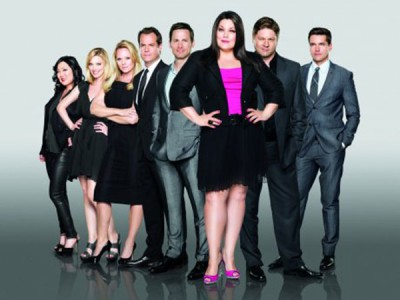 TV show description:
As the series begins, a vapid blonde aspiring model named Deb Dobson (Brooke D’Orsay) is killed in a car crash. As her soul enters the gates of Heaven, she finds herself declared a self-centered “zero” by the gatekeeper, Fred (Ben Feldman). Not liking what she’s heard, she presses return, hoping to get back to Earth. Deb gets her wish but doesn’t end up in her own body. Instead, she finds herself deposited inside recently-deceased Jane Bingum (Brooke Elliott). Jane’s a highly-intelligent, plus-size attorney who was accidentally shot. Superficial Deb is initially horrified by her new form but in time begins to discover the meaning of inner beauty.

Though she has Jane’s form and legal knowledge, Deb doesn’t have Jane’s memories, making for some very uncomfortable situations. Things are made even tougher by the fact that Deb’s boyfriend, Grayson Kent (Jackson Hurst), works at the same law firm. She’d love to pick up their relationship but he’s still grieving for her former self. Hot-shot lawyer Kim Kasswell (Kate Levering) has always looked down on Jane because of her appearance and wants to start a relationship with Grayson now that Deb is “gone.”

Teri Lee (Margaret Cho) is Jane’s office assistant who tries to help her boss overcome her confusion. After sending Deb back to Earth, Fred is demoted to be her guardian angel and works in the firm’s mailroom to keep an eye on her. He ends up falling for aspiring actress/model Stacy Barnett (April Bowlby), Deb’s best friend and the only person to know the truth about Jane.

Series Finale:
Episode #78 — It Had to Be You
While Owen and Kim attempt to talk some sense into Jane about her relationship with Ian, Stacy is caught in the middle. Meanwhile, Teri has her own grievances with Ian when she realizes he is her former classmate responsible for ruining her chances at stardom. Owen and Jane find themselves on opposite ends of a case while Kim represents her former temp when he’s fired from his temp agency.
First aired: JUne 22, 2014.

What do you think? Do you still like the Drop Dead Diva TV series? Do you think that it should end?

I am so sorry I meant that they shouldn’t have cancelled the show not that should have. Thank you once again I loved that show.

That is so sad no I don’t think they should have cancelled Drop Dead Diva my sister and I loved that show. And we were looking forward to it coming back. So sad!!

I really looked forward to this show. I hope fans can bring about a revival. Power to the pretty, plump pulchritudinous protagonist!

VERY DISAPPOINTED IT WAS CANCELLED, JUST FOUND OUT. Been waiting for it to come back on. Did some research and found out it was cancelled. IT SUCKS!!!!!!!!!!!!
BRING IT BACK PLEASE!!!!!

so so dissapointed was looking foward for new episodes

I don’t understand why this was cancelled? So many people I know watch this show and we discuss it because of how great it is. It is full of wit, empowerment, comedy, and romance as well as a bit of suspense! I CANNOT BELIEVE THIS!!!!

I can’t believe that they are canceling the show when was I hoping that there was going to be closure between Grayson and Jane. They should do at least a movie or something to end this series. I know that they might not be enough for 2 or 3 seasons more, but at least a last one.

my best friend and i love this show. really hope the network changes their mind. its wonderful. please.

Hi from Mexico..My girlfriend loves the show, I need it back to keep her happy come on, at least one more season.

My mom and I both LOVE LOVE LOVE this show if they Have to end it can they not give it a DECENT ending for the Wonderful show that it was????

I wait all year for this show to debut again. Unlike many, this show just keeps getting better… every character grows, and we grow HAPPILY with them! By now, I love every character, except the new guardian angel mr tough love.

[…] Lifetime has announced that season four of their legal dramedy Drop Dead Diva will kick off on Sunday, June 3rd. the cable channel […]

[…] has announced that season four of their legal dramedy Drop Dead Diva will kick off on Sunday, June 3rd. The cable channel ordered 13 new episodes last […]

I’m waiting for the return of Drop Dead Diva and hope that love will win.

Love this show, can’t wait for it to start another season.