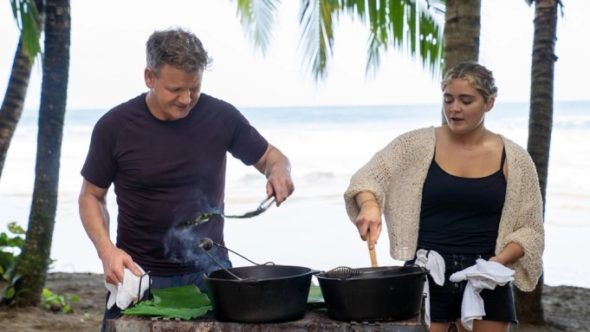 “In Gordon Ramsay: Uncharted Showdown, Gordon faces off against UK star chefs Paul Ainsworth and Matt Waldron, who got their starts in Ramsay kitchens before opening their own restaurants. With Paul and Matt working on their home turf, Gordon has to dig deep in the final cooks to prevent his students from becoming the masters. While in Costa Rica, Gordon faces his biggest challenge yet: going head-to-head with his daughter Tilly, the multi-BAFTA Award-nominated CBBC cooking show star and cookbook author, in an epic culinary showdown in the series finale.”

As for World of Flavor, the series follows Big Moe Cason, a Navy veteran and champion pitmaster, as he “embarks on an epic journey to seek out the most mouthwatering dishes cooked over an open flame.” Across the four episodes, he’ll travel to the Bahamas for fresh conch, to Louisiana for roasted ‘gator, to connect to his roots in South Carolina, and to piranha-infested waters in Colombia.

What do you think? Are you excited to see these two shows on National Geographic at the end of July?

Another crazy cooking show like Hell kitchen been around 17 years ago started his tv career. Making billions of dollars insane amount of money. Don’t like him awful bad boss shamed of himself.