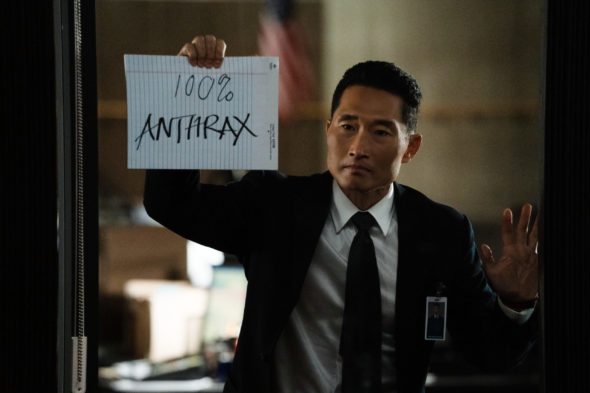 National Geographic is setting up its schedule for next season. The cable channel has announced their line-up for the 2021-22 season, and it includes the second season of the scripted Hot Zone anthology series, which will follow the anthrax outbreak after 9/11. Trafficked with Mariana Van Zeller, Gordon Ramsey: Uncharted, Running Wild with Bear Grylls, Life Below Zero, Wicked Tuna, and The Hot Zone will also be airing on the cable channel next season.

National Geographic revealed more about the line-up plans in a press release.

With the world still reeling after the attacks on 9/11, America faces a second wave – the anthrax letters. Targeting journalists and politicians, mail with anthrax powder kills five people and causes panic across the United States. Limited series THE HOT ZONE: ANTHRAX follows FBI Special Agent Matthew Ryker (Kim) as he tracks down the killer, finding himself ensnared in an unstable web of psychological warfare. Bruce Ivins (Goldwyn) is the brilliant microbiologist who becomes embroiled in the hunt. The six-hour scientific thriller follows last year’s THE HOT ZONE, which was National Geographic’s most-watched scripted series of all time.

The common theme in LIFE BELOW ZERO and PORT PROTECTION, ALASKA is people who have left traditional society behind. They have chosen a different life, with varying degrees of danger and challenges, in their remote regions of Alaska. In LIFE BELOW ZERO: NEXT GENERATION, an all-new cast has abandoned contemporary life in favor of freedom in the brutal Alaskan wilderness. They speak to the growing dissatisfaction the current generation has with technology and convenience, which is ubiquitous in modern life. Cameras capture the cast members as they rush to prepare for and survive the frozen months of winter to the spring thaw. Executive Producers are Travis Shakespeare and Joseph Litzinger for BBC Studios.

Last season, the hit outdoor adventure series RUNNING WILD WITH BEAR GRYLLS found its new home on National Geographic with bigger action and wilder destinations than ever before. World-renowned survivalist Bear Grylls returns for another season, leading a brand-new slate of celebrities into the wildest corners of the planet for epic, life-changing adventures that will challenge their perceived limitations. Each week, a new celebrity guest leaves the luxury of their homes to join Bear for a no-holds-barred journey through some of the most extreme environments in the world. Together, they must rely on bushcraft techniques to survive each dangerous location while pushing through both mental and physical limits to face ambitious obstacles that will make even the bravest shudder. RUNNING WILD WITH BEAR GRYLLS is produced by Electus, a Propagate Company, and The Natural Studios. For Electus and The Natural Studios, Bear Grylls serves as executive producer along with Chris Grant, Drew Buckley, Ben Silverman, Howard Owens, Liz Schulze, Rob Buchta and Delbert Shoopman.

National Geographic’s hit series WICKED TUNA is back on the high seas. Follow a group of salty commercial fishermen from the nation’s oldest seaport in Gloucester, Massachusetts, as they earn their living through rod-and-reel fishing in pursuit of the prized bluefin tuna. Later this year, the popular spinoff WICKED TUNA: OUTER BANKS returns. WICKED TUNA: OUTER BANKS follows a southern fleet of top captains battling to catch bluefin in the dangerous waters off the coast of North Carolina. This season, they face the most treacherous weather in the series’ history, and captains must work together to catch the elusive bluefin. WICKED TUNA is executive produced by Craig Piligian and Mike Nichols, and co-executive produced by Lorene Machado for Pilgrim Studios.

Gordon Ramsay laces his boots, grabs his knives and buckles up as he hits the road to embark on more exhilarating adventures, exploring world cultures through food in National Geographic’s GORDON RAMSAY: UNCHARTED. The multiple Michelin-starred chef and Ironman athlete feasts his way around the globe – risking life and limb in daring missions – in pursuit of culinary inspiration and edible excellence. In the most ambitious and far-reaching season yet, Ramsay partakes in culinary customs, learns about delicious delicacies and tastes fresh flavors unique to each region under the guidance of the local experts and food legends he meets along the way. GORDON RAMSAY: UNCHARTED is executive produced by Gordon Ramsay, Lisa Edwards, Jon Kroll and Tom Willis for Studio Ramsay.

Award-winning journalist Mariana van Zeller continues her harrowing exploration into the underworld’s most dangerous black markets. Armed with National Geographic’s trademark inside access, each episode follows Mariana as she works her way inside a different black market or global trafficking network – from meth, marijuana and stolen cars to outlaw bikers clubs and Amazon mafias – where she meets the players and learns the business, all in an effort to understand the inner workings of the world’s multitrillion-dollar shadow economy. For Muck Media, executive Producers are Mariana van Zeller, Darren Foster and Jeff Plunkett.

Check out a trailer for the new season of The Hot Zone: Anthrax below.

What do you think? Are you excited about the return of these shows on National Geographic?

AWESOM  news Running wild with Bear Grylls !!!!! LOVE the show sad it is taking so long to air the great TV shows again !!! I personally am so tired of all the reruns nice to have something new to watch again !!!!!!!