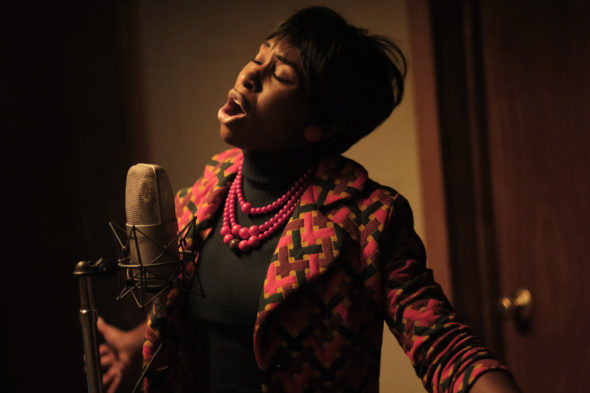 Is this legend getting the r-e-s-p-e-c-t that she deserves? Has the Genius TV show been cancelled or renewed for a fourth season on National Geographic Channel? The television vulture is watching all the latest cancellation and renewal news, so this page is the place to track the status of Genius, season four. Bookmark it, or subscribe for the latest updates. Remember, the television vulture is watching your shows. Are you?

Airing on the National Geographic Channel, Genius dramatizes the stories of the world’s most brilliant innovators, their extraordinary achievements and their sometimes volatile, passionate, and complex personal relationships. Season three tells the story of the Queen of Soul, Aretha Franklin, and stars Cynthia Erivo, Courtney B. Vance, Malcolm Barrett, David Cross, Patrice Covington, Rebecca Naomi Jones, Steven Norfleet, Pauletta Washington, Omar J. Dorsey, Marque Richardson, Kimberly Hébert Gregory, and Shaian Jordan. The season follows the musical genius and her incomparable career, as well as the impact and lasting influence she has had on music and culture around the world. Grammy Award winner Franklin was a gospel prodigy, an outspoken civil rights champion and is widely considered to be one of the greatest singers of the past 50 years, receiving nearly countless honors throughout her career.

The third season of Genius averaged a 0.13 rating in the 18-49 demographic and 1.10 million viewers. Compared to season two , that’s up by 126% in the demo and up by 204% in viewership. Find out how Genius: Aretha stacks up against other National Geographic Channel TV shows.

Genius has already been renewed for a fourth season (which will follow the life of Martin Luther King Jr.) but the show is moving to the Disney+ streaming service. It’s unclear if National Geographic will air it at some point. I’ll update this page with breaking developments. Subscribe for free alerts on Genius: Aretha cancellation or renewal news.

What do you think? Are you glad that the Genius TV show has been renewed for a fourth season? Will you follow it to Disney+? Should National Geographic Channel air season four at some point?

It’s obvious where this is heading & I’m very disappointed. It was bad enough they scratched Mary Shelley for Franklin, now MLK for the next season & moving to Disney +…it’s beyond disappointing.