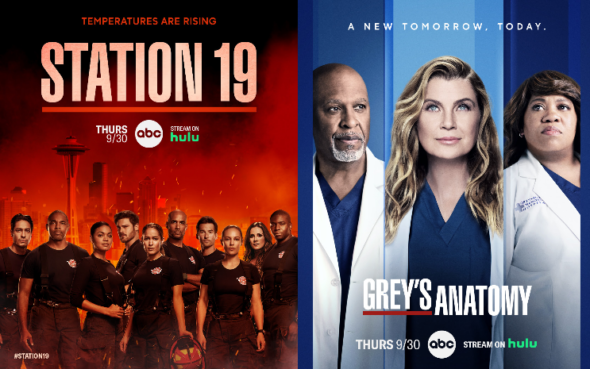 Fans of Grey’s Anatomy and Station 19 still have a week to wait before the shows’ return, but ABC has released a new teaser for the big crossover premiere event set for September 30th.

ABC released details for the premieres of both shows below.

“Phoenix from the Flame” – Relationships are challenged at Station 19 following Sullivan’s actions at Maya and Carina’s wedding, putting his marriage with Andy to the test. Dean comes to terms with his feelings for Vic, while Travis rekindles an old flame. The annual Phoenix Festival brings out some reckless behavior in some of Seattle’s citizens, challenging the teams at Station 19 and Grey Sloan Memorial in the season premiere of Station 19, THURSDAY, SEPT. 30 (8:00-9:00 p.m. EDT), on ABC.

“Here Comes the Sun” – As the city of Seattle revels at the Phoenix Fair celebrating the city’s rebirth post-COVID, the Grey Sloan doctors treat a patient who encounters illegal fireworks. Meanwhile, Bailey has her sights set on hiring new doctors, but she’s having trouble finding viable options. Owen and Teddy attempt to take the next step in their engagement, and Meredith has a surprising opportunity when she meets a dynamic doctor from her mother’s past on the season premiere of Grey’s Anatomy, airing THURSDAY, SEPT. 30 (9:00-10:01 p.m. EDT), on ABC.”

Check out the preview for the crossover event below.

What do you think? Are you excited about the return of these ABC dramas next week?

Ok been watching GA since it first came on, but not sure what else the writers can write about.,,I like station 19 , it’s a good show , but again, sometimes the direction writers take can ruin the show !

Can’t wait for the season premiere. Been watching since the beginning!!!!