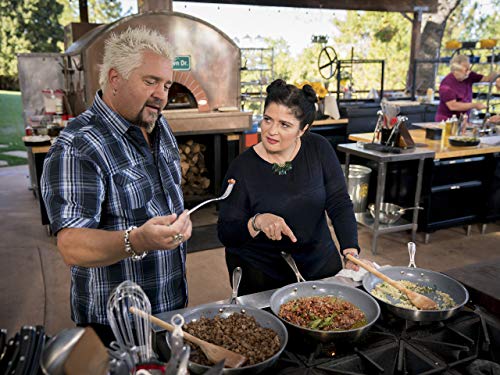 Food Network is returning to the ranch. The network just announced a new season of Guy’s Ranch Kitchen will premiere in September.

NEW YORK – August 21, 2019 – Guy Fieri has traveled the world tasting the greatest food, visiting incredible restaurants, and meeting amazing chefs. On Saturday, September 28th at 12:30pm ET/PT, these famous chefs bring the bigtime flavorsto the new season of Guy’s Ranch Kitchen. With all the cooks in the same kitchen, including Richard Blais, Traci Des Jardins, Amanda Freitag, G. Garvin, Eric Greenspan, Alex Guarnaschelli, Antonia Lofaso, Aaron May, Marc Murphy, Christian Patroni, Carl Ruiz, Aarti Sequeira, Michael Voltaggio, Justin Warner, and Jonathan Waxman a friendly competition sparks to outdo each other by serving up the most delicious dish. From a burger bash, to hand-held bites, and from a Parisian-style brunch, to a spectacular holiday feast, each episode is stuffed with stories, laughs, and dynamite recipes.

“For Guy and his friends, preparing a delicious meal together is just as memorable as the dishes they make,” Courtney White, President, Food Network. “Viewers will enjoy the anecdotes they share while cooking together, and will take away new tips and recipes they can use in their own kitchens.”

On the premiere episode, it’s time to chow down and watch the big game. The chefs are putting a Calexico spin on a tasty tailgating menu. Inspired by ingredients from Guy’s home state of California and dishes from one of his favorite food countries, Mexico, the chefs are whipping up a Calexico feast. Eric Greenspan makes breakfast burritos with made-from-scratch spicy chorizo. Richard Blais prepares black mole with a sweet kick from charred roasted carrots and puts a Latin spin on cheesy poutine. Carl Ruiz makes an escabeche with a special secret sweet ingredient – roasted papaya. He also serves up beefy picadillo-stuffed plantains. Last but not least, Antonia Lofaso adds a spicy seafood tostada, and she seals this meal with a decadent dessert that combines all the best parts of a sundae with rice pudding.Week after week viewers will have front row seats to all the action, banter and incredible recipes.

What do you think? Are you a fan of Guy’s Ranch Kitchen? Will you watch the new season?

Just watched it for the first time, and loved the home funKitchen feel…mimicking our own family kitchen sessions. His comment of great chefs using limited ingredients available sealed it for me. That’s what spurs creativity to a large extent…having fun with what’s on hand!

While I enjoy Guy’s other shows I actually found Ranch Kitchen to be quite boring, and I doubt I’ll be checking out the second season.