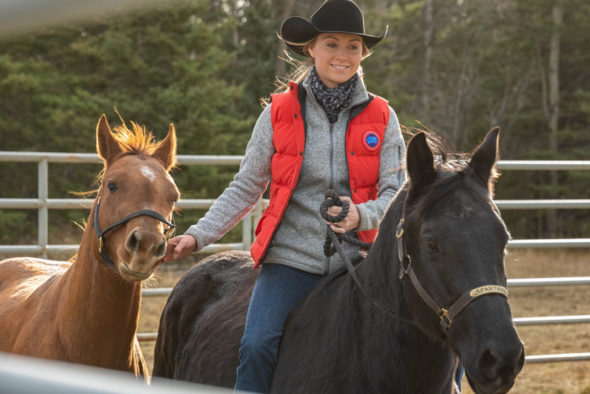 The long-running Heartland TV series is returning with “new” episodes on U.S. television. The long-awaited 14th season debuts tonight, July 8th, on the UPtv cable channel. There will be 10 weekly episodes.

The Heartland series originates on CBC in Canada and the 14th season of 10 episodes aired from January until March on the channel. The drama’s already been renewed for a 15th season in Canada.

In the States, Netflix also streams the Heartland series but typically releases the newest season much later.  Seasons 12 and 13 came to Netflix in February 2021 so it seems likely that season 14 won’t arrive until 2022.

Check out our status sheets to track new TV series pickups, renewals, and cancellations. You can find lists of cancelled shows here.
What do you think? Do you enjoy the Heartland TV series? Will you be watching season 14 episodes on UPtv or, waiting for Netflix to stream them?

Heartland is my very favorite show next to Yellowstone, I can’t get enough of these shows!!! Best ever, don’t ever take these two shows away from me!!! Was very disappointed when l couldn’t watch Heartland during the holidays but will be watching it this morning @ 3:00 am pacific time!!!! Thank you for bringing this show back!!!

I love Heartland. I’m trying to find where I can watch season 14. I watched 1-13 on Netflex but now I’m lost! I will keep searching until I find a way.

did you ever find a way

I watch Heartland every night even if i saw episode before

how can I watch Heartland on TV

I love heartland, I feel like they are my family, please have it on soon

When will we see season 14 episodes 1-6
Of heartland?

Great TV series Missed the month of July but will watch the rest on IPTV and them watch season 14 on Netflix when it airs.

Where can I find the first 3 episodes of season 14