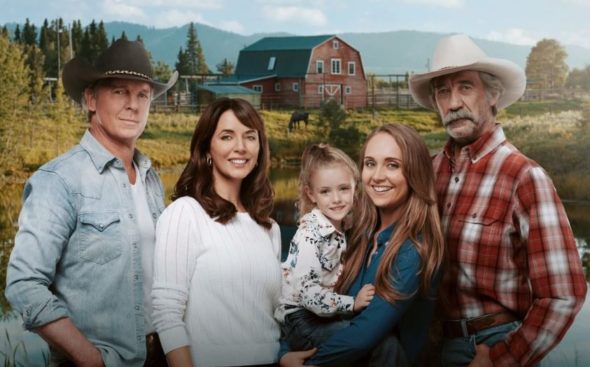 The 15th season of Heartland comes to a close tonight on UPtv but that’s not the end. The ranch family drama series has been renewed for a 16th season in Canada.

The Heartland TV show is based on the bestselling series of books by Lauren Brooke. The cast includes Amber Marshall, Michelle Morgan, Shaun Johnston, Alisha Newton, Chris Potter, Kerry James, Gabriel Hogan, Nathaniel Arcand, Jessica Steen, Ziya Matheson, and Lucian-River Chauhan. It’s a multi-generational saga that’s set on the Heartland ranch in the rolling foothills of Alberta, Canada. It follows Amy Fleming (Marshall), her older sister Lou (Morgan), and their Grandfather Jack (Johnston). Together, they confront the challenges of running the ranch that has been in their family for generations.

The series originates on CBC in Canada, and filming for season 16 of Heartland began last month.  While the past three seasons have had just 10 episodes each, the 16th season will have 15 installments. It appears that Morgan may be missing for a portion of the season as she departed the set for maternity leave at the end of June. She delivered a daughter a couple of weeks ago.

The 16th season of Heartland is expected to debut in Canada at some point this fall. As per usual, there’s been no official announcement that the UP Faith & Family streaming service, UPtv cable channel, or Netflix streaming service will carry the new episodes. Given the show’s popularity, it would be surprising if the outlets didn’t pick up season 16.

Netflix also streams the Heartland series in the United States but typically releases the newest season much later than other outlets, typically in the first quarter of the year. Season 14 was released on April 1st of this year. Season 15 will likely air in the first part of 2023 with season 16 following in early 2024.

What do you think? Do you enjoy the Heartland TV series? Which channel or streaming service will you use to watch season 16?

Please show season 16 of heartland on Uptv channel 188 I really love the show and I am sooo ready for more !!!!

Love watching Heartland on Cozi TV on Sundays. It comes on at 11 am – 3 pm. It is such a great show that I sit right there to the very last minute.
Hope this show stays around for a long time
and is on Cozi TV in the United States. Very family oriented. Such an amazing show.
Thank you from Central New York

Great show! My girls and I love to watch it on Netflix. Keep up the great family values.

Pm heart land is a great show
We need more like them here in the USA. From KY.

I love Heartland I wish more Channels would be available & sooner.

We love ❤️ Heartland. Here in Chile we see it on Netflix Chile. We can’t wait for the next season !!!