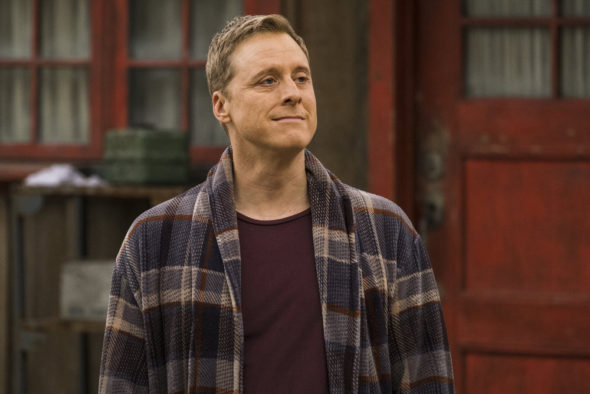 Harry’s adventures aren’t over yet. Syfy has renewed the Resident Alien show for a third season. The second season resumes on August 10th.

A sci-fi comedy series, the Resident Alien TV show is based on the Dark Horse comic series and stars Alan Tudyk, Sara Tomko, Corey Reynolds, Elizabeth Bowen, Alice Wetterlund, Levi Fiehler, and Judah Prehn. The story revolves around Captain Hah Re (Tudyk), an alien with the secret mission to kill all humans. He crashes on Earth and passes himself off as a human doctor named Dr. Harry Vanderspeigle in a small town in Colorado. In his new guise, Harry starts off living a simple life but things get complicated when he’s roped into solving a local murder and realizes he needs to assimilate into his new world. In season two, Harry is once again stranded on Earth where he must confront the consequences of having failed his people’s mission to destroy the human race. On his new quest to protect the people of Earth, Harry struggles to hold on to his alien identity as his human emotions grow stronger by the day.

Airing on Wednesday nights, the second season of Resident Alien averages a 0.15 rating in the 18-49 demographic and 1.06 million viewers in the live+same day ratings (includes all DVR playback through 3:00 AM). Compared to season one, that’s down by 23% in the demo and down by 6% in viewership in the live+same day ratings (including DVR playback through 3:00 AM). While these numbers don’t include further delayed or streaming viewing, they are a very good indicator of how a show is performing, especially when compared to others on the same channel. The show is currently Syfy’s highest-rated scripted series though the channel doesn’t have many these days.

Harry’s officially back for thirds. #ResidentAlien will return for Season 3, and don’t miss the rest of Season 2 on August 10! pic.twitter.com/DJtbnyfnn3

What do you think? Have you enjoyed watching season two of the Resident Alien TV series so far? Are you glad to know that the Syfy show’s been renewed for a third season?

Love this show! One of the best shows on TV. Really makes one look at human behavior in a new light.

Appreciate the info. Besides Yellowstone, this is my wife and me’s favorite series

A wonderful off-key, intelligent comedy. And it is absolutely brilliant if comparing to the over sized overload of noisy game shows! Harry’s reasoning process is intriguing, very interesting to see how a real alien might view our world.

Season three, bring it on!!

Love this show!!! So glad it wasn’t canceled.

Omg!! I absolutely love this show!! he plays the alien character so well!! Best alien movie ever! so happy there’s a season 3!!

I am so glad that series 3 will continue on but the wait is so long till 2023 . Watch every episodes without missing one since the start of Resident Alien .. It is my far most favourite TELEVISION SHOW so far
Funny Witty Surprising and all .
Can’t wait to see the series 2 again and like I said #3 will be a long wait
Thank you all Actors and Actresses for your all well done .

So happy about this news!

It’s one of the funniest shows on tv. Also Tacoma FD. I love Asta and the other ladies.

I’m confused. Is August 10, episode 9 of season 2, or episode 1 of season 3? Are they abruptly ending season 2 at 8 episodes & switching to season 3, or finishing 2 then starting 3?