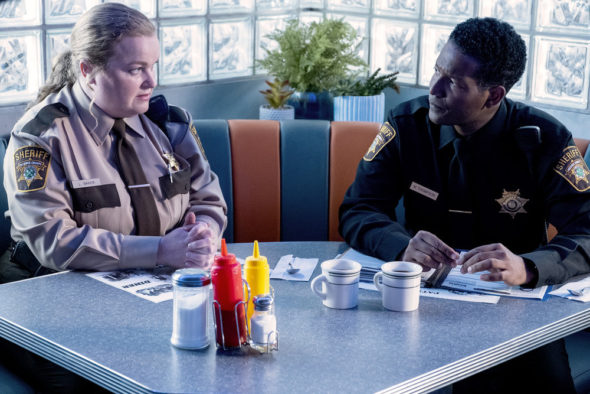 Can Harry truly be happy living among humans? Has the Resident Alien TV show been cancelled or renewed for a third season on Syfy? The television vulture is watching all the latest cancellation and renewal news, so this page is the place to track the status of Resident Alien, season three. Bookmark it, or subscribe for the latest updates. Remember, the television vulture is watching your shows. Are you?

Airing on the Syfy cable channel, the Resident Alien TV show is based on the Dark Horse comic series and stars Alan Tudyk, Sara Tomko, Corey Reynolds, Elizabeth Bowen, Alice Wetterlund, Levi Fiehler, and Judah Prehn. The story revolves around Captain Hah Re (Tudyk), an alien with a secret mission to kill all humans. He crashes on Earth and passes himself off as a human doctor named Dr. Harry Vanderspeigle in a small town in Colorado. In his new guise, Harry starts off living a simple life but things get complicated when he’s roped into solving a local murder and realizes he needs to assimilate into his new world. In season two, Harry is once again stranded on Earth where he must confront the consequences of having failed his people’s mission to destroy the human race. On his new quest to protect the people of Earth, Harry struggles to hold on to his alien identity as his human emotions grow stronger by the day.

The second season of Resident Alien averages a 0.15 rating in the 18-49 demographic and 1.05 million viewers in the live+same day ratings (includes all DVR playback through 3:00 AM). Compared to season one, that’s down by 23% in the demo and down by 6% in viewership in the live+same day ratings (including DVR playback through 3:00 AM). While these numbers don’t include further delayed or streaming viewing, they are a very good indicator of how a show is performing, especially when compared to others on the same channel. Though other economic factors are involved, the higher-rated shows usually get renewed and the lower-rated ones get cancelled. Find out how Resident Alien stacks up against other Syfy TV shows.

What do you think? Do you hope that the Resident Alien TV show will be renewed for a third season? How would you feel if Syfy cancelled this TV series, instead?

it is one of the best shows I’ve seen in a long time give it a go, greenlight for season 3 and 4

I like Resident alien. It is quirky and interesting.

Remember the fallen: First Wave, First Night, Fireflies, Babylon 5, Krypton, the 100 and many more. They were all very popular and loved, but were cancelled by Sci-fi.

THIS IS A MUST KEEP SHOW! NEVER HAD ANYTHING SO INVIGORATING! IT’S LIKE NOTHING ELSE ON TV TODAY!

MUST MUST MUST CONTINUE THIS SHOW!!! I CANNOT WAIT TO WATCH IT WHEN ITS ON!!

I love this show! Please renew it!

Please renew this show!! There is nothing else like it, very original. Love the actors who all bring it to life and love the Native American characters and the sense of place, not to mention the gorgeous scenery.

My girlfriend and I are addicted to this show. Love the plot each episode and it gets better. Hope they will renew the series. The actors are great and bring a fresh approach to the show. Yes, it is like a soapy opera, but only better.

I love this show I’m rather invested! Will Harry save the planet from the other aliens? Will the baby alien adapt to humanity and assimilate or just eat people? Will the sherif and the deputy finally figure out they are in love with each other? And will the government people all end up dead 2 down 1 to go. I have questions I need not want need to be answered.

I love it, finally something new and original, very good special effects, and a nice story, funny, it has everything
Bravo, keep going
Thank you

Please do not cancel this show!! My husband and I love this show!! It’s different, funny, sooo funny! This show makes us laugh, we all need some good laughs!!! The characters are so good, and the actors really do an excellent job!!

Please do no cancel This show. Clever and witty. Characters are unique and well acted. Nothing like it on tv these days. Original, funny and entertaining.

It’s a great creative show, with great witty, humor.
I like the American Indian lore that gives the show a particular flavor, setting it apart from the common comedy.
A cast of diverse characters and clever children.
Keep it going
Refreshing humor and great insights into human life and emotions.