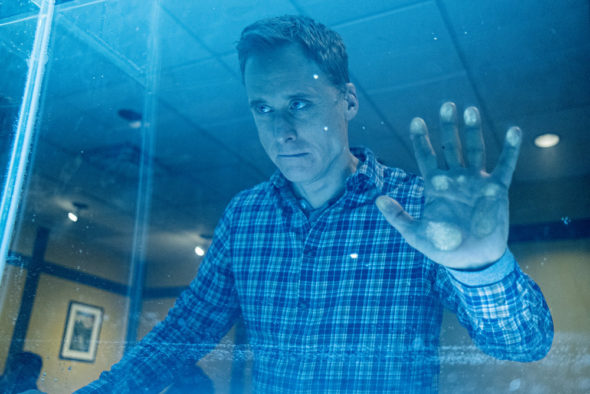 In its first season, the Resident Alien TV series was a big success for Syfy in the ratings. Will it continue to be a strong performer this time around? Will Resident Alien be cancelled or renewed for season three? Stay tuned.

A sci-fi comedy series, the Resident Alien TV show is based on the Dark Horse comic series and stars Alan Tudyk, Sara Tomko, Corey Reynolds, Elizabeth Bowen, Alice Wetterlund, Levi Fiehler, and Judah Prehn. The story revolves around Captain Hah Re (Tudyk), an alien with the secret mission to kill all humans. He crashes on Earth and passes himself off as a human doctor named Dr. Harry Vanderspeigle in a small town in Colorado. In his new guise, Harry starts off living a simple life but things get complicated when he’s roped into solving a local murder and realizes he needs to assimilate into his new world. In season two, Harry is once again stranded on Earth where he must confront the consequences of having failed his people’s mission to destroy the human race. On his new quest to protect the people of Earth, Harry struggles to hold on to his alien identity as his human emotions grow stronger by the day.

Note: The second season premiere was simulcast on USA Network and drew a 0.12 in the demo with 536,000 viewers.

For comparisons: Season one of Resident Alien on Syfy averaged a 0.19 rating in the 18-49 demographic and 1.13 million viewers in the live+same day ratings.

What do you think? Do you like the Resident Alien TV series on Syfy? Should it be cancelled or renewed for a third season?

We Love the show, we are in our 60s cannot wait until season 3.

WANT IT BACK! Two votes me and hubby

After being TOTALLY enthralled by Season 1, Season 2 was a HUGE disappointment.
Until the last couple of episodes when it REALLY picked up.
Hopefully, not a case of “too little, too late.”