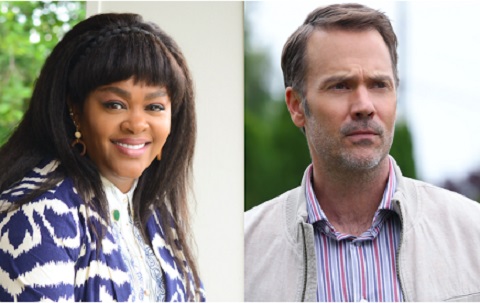 Get ready for a reboot of Highway to Heaven on Lifetime. The cable channel is creating a new version as a series of movies starring Barry Watson (7th Heaven) and Jill Scott.

The original TV show version was created by star Michael Landon. It ran for five seasons on NBC, from 1984 until 1989, and revolves around a probationary angel who is sent to Earth to help those in need.

Lifetime revealed more about the new Highway to Heaven in a press release.

“Lifetime is offering an inspiring new take on a beloved classic with the greenlight of the event movie series Highway to Heaven starring Grammy(R) winner Jill Scott (First Wives Club), who also Executive Produces, as the new angel Angela who comes down to Earth to help people in crisis. It also stars Barry Watson (The Loudest Voice) as Junior High School principal Bruce to whom Angela reveals her true identity. In cooperation with Cindy Landon and the Michael Landon Estate, the wheel of movies are inspired by the highly-rated 80s drama that ran over 100 episodes between 1984 – 1989. With a constant theme throughout of love and kindness, the reboot aims to inspire hope and community as it addresses contemporary social and emotional issues, this time with a female angel as the anchor of the movie series.

This marks a reunion for Lifetime and Jill Scott, who previously starred in the Emmy(R) nominated Flint centered on the water crisis, the all-African American reboot of Steel Magnolias and Sins of the Mother. Barry Watson also returns to Lifetime for his first non-holiday movie role for network, having previously starred in A Very Nutty Christmas and The Santa Con.

“The original Highway to Heaven was appointment viewing for millions and in a time when we need those messages of hope the most, we are excited to bring back the iconic series in a new way,” said Tanya Lopez, Executive Vice President, Scripted Programming, Lifetime & LMN. “Having worked with Jill previously for some of Lifetime’s most celebrated movies, we know she is the perfect actor to bring her passion and brilliance to this role. I just love her… Jill amplifies everything she touches in ways that make her pop off the screen. And the addition of Barry was just icing on the cake. I believe we have assembled a dynamic new duo with both Jill and Barry at the helm.”

Lifetime’s Highway to Heaven follows Angela (Jill Scott), an angel sent back to Earth by God, to help others in need. In the premiere movie, Angela assumes the role of a temporary school counselor and finds herself working alongside the principal Bruce (Barry Watson) as she intervenes in the lives of a troubled student Cody (Ben Daon, The Astronauts) and his father Jeff (Robert Moloney, Riverdale/You Me Her) after the tragic loss of Cody’s mother, Melissa (Ashley Ross, A Series of Unfortunate Events). As Angela seemingly works miracles with Cody and Jeff, Bruce is in disbelief when he learns of the divine nature of Angela’s work.

What do you think? Are you going to check out the Highway to Heaven movie series on Lifetime? Did you watch the TV show starring Landon?

Seems everyday there is more sadness in our country. Our country is divided and crime is out of control. So if this show brings an hour or 2 of hope and promise, then I am happy and look forward to watching!

Looking forward to watching it. I love Barry Watson!!!!

Sound good with me look forward new series remake enjoy it and love it.

It was my favorite show! When will the new one air?

I loved the original. I don’t go for “do overs”.

Haven’t seen much of Highway to Heaven in my life. I was born in 1992 so I’m more familiar with Touched by An Angel. They might be pretty similar to each other for all I know. That being said, people need to come up with their own ideas.

I will stick to original episodes

YES. i WILL LOOK FORWARD TO IT