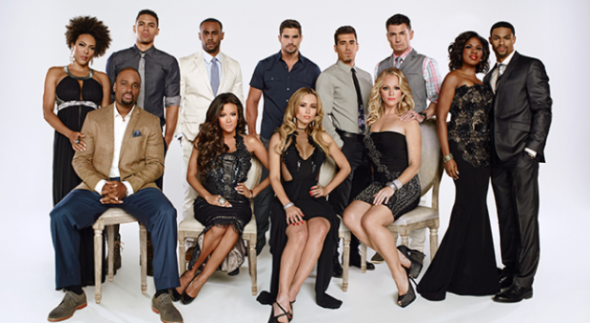 TV show description:
Created by Tyler Perry and a loosely a spin-off of the movie The Single Moms Club, this soap opera revolves around the relationships of five diverse and married couples who live on Castillo Lane in a middle-class area of the fictional community of Maxine.

On the surface they are true-to-life, relatable people—raising children, working jobs, finding and maintaining romance. However, just below the veneer of happiness, we see that their lives are entangled by heartbreak, deceit, and lies.

As the series begins we find that there’s a torrid affair between psychologist Randal (Eltony Williams) and housewife Alex Montgomery (Amanda Clayton). Randal’s wife is estate agent Marcie (Heather Hemmens) and she desperately wants children. However, Randal’s attention is focused on the wife of his best friend, a businessman named Brad (Aiden Turner).

Just down the street, city 911 operator and divorcée Esperanza (Zulay Henao) is trying to move on with her life. She’s keeping her budding relationship with Julius (Octavio Pizano) a secret from her vindictive ex-husband Edward “Eddie” Willis (Joel Rush).

Meanwhile, neighbor Kelly Issacs (Edwina Findley) longs to marry Travis (Denzel Wells) but he’s away on a relief mission in Haiti and has promised to help Kelly raise her eight-year-old son, Justice.

Outside of the neighborhood, single mother and fast food owner Natalie (April Parker Jones) struggles to raise her children in the inner city. Lushion (Malik Whitfield), the father of her son Frank, has returned to town and stepped up to the plate to help. In addition, Natalie grapples with a tough decision — whether or not to allow her fourth son, Joey (Matt Cook), to return home once he is released from prison.

What do you think? Do you like the If Loving You Is Wrong TV show? Do you think it should be ending or renewed for a sixth season?

I want it to come back on, they don Alex wrong and she has to get cleared

Carol Randolp! I think this show is Great. Definitely a Renee. Thanks!

This was very disappointing. This left me hanging. Is Tyler Perry burned out? Sad way to leave fans hanging.

I love this show as well as other Tyler Perry shows on OWN and was very unhappy to hear that it was not returning .I looked forward to watching every week. I guess I really took it for granted. I hope they bring it back even if its a spin off

Please bring back if loving you is wrong. I love this show and to leave us hanging like this just isn’t fair. Too much happened & we need to see this out.

I have really enjoyed the show. Tyler Perry left us hanging with the season finale.please give us the 6th season of If Loving You is wrong!

Show was ridiculous. Leave it dead. Enjoyed it for a long time. This last season was incredibly unbelievable. Looked like the writers were tired of show too. Move on

Show was good the 1st few seasons but started 2 get 2 off track. Using the phrase “R. U. Sure 2 much every week . & Kelly getting out of jail & not going 2 get her son immediately after not seeing him 4 so long.Too many unanswered questions. No move on 2 something else Tyler☹

I think most of it made sense, but I didn’t like that a child was killed. It would of been nice to know who the baby’s father was. I, also didn’t like the whole framing Alex thing that was all sloppy I wish they ended it different. Lastly, what’s going to happen to the girl who got taken away and the husband. Too many loose ends, very disappointed.

Oh my….. Mr. Perry why was this program ended. This was my favorite Tuesday PM program.
Not to say…..Mr. Perry you ended this program in a MIGHTY way, thank God for the method of recording. You have such an imaginative mind.
The mind is a terrible thing to lose…yours is going NOWHERE.

Don’t just leave us have hanging!! This cannot be all!! Why would you DO that? It had just started to get GOOD!! One more season. Please!!