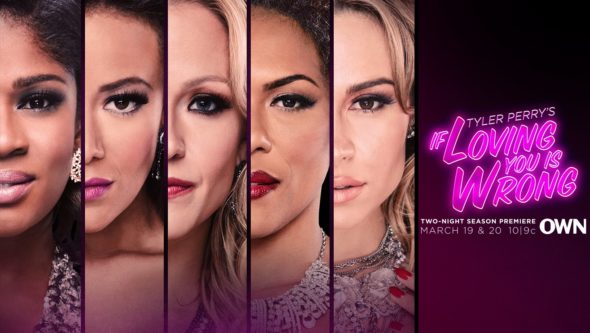 Though the season length, numbering, and scheduling of OWN shows can be confusing, TV series like If Loving You Is Wrong have still managed to attract some fiercely loyal fans. After more than a year since last season’s finale, and some premiere date misfires, the Tyler Perry series is finally back for its fourth season. Is the audience still in love with it, or have its affections drifted? Will If Loving You Is Wrong be cancelled or renewed for season five? Stay tuned. *Status update below.

Below are the If Loving You Is Wrong season four TV ratings. Ratings are typically the best way to predict if a TV series will be cancelled or renewed. These figures will be updated as the weeks progress.

For comparisons: The third season of If Loving You Is Wrong averaged a 0.39 rating in the 18-49 demographic and 1.654 million total viewers.

What do you think? Do you still like If Loving You Is Wrong TV series? Should it be cancelled or renewed for a fifth season on OWN?

BRING THE SHOW BACK!! I need to know what happened

I really enjoy watching If Loving You Is Wrong. I love the story line and actors. Please renew it just can not end like it did.

I love if loving you is
Wrong. Keep the drama coming. There aren’t alot of good TV shows on regular cable screens
And when we get some they take them away
Pls give us season 6 and
7 I love Tyler Perry shows. Pls dont cancel
Keep it coming

I am sometimes amused and sometimes amazed how knee-jerk viewers who are thankfully in a minority tries to find something wrong with Perry’s work. The idea that they create a social media storm over a woman’s wig in A Fall from Grace tells it all. I didn’t necessarily notice because in real life and that is what these people claim they want, wigs do go through their transformations! It was a superb drama and over 20 million people tuned in but that’s not the point here. What I want people to understand is that we should be looking at Mr.… Read more »

Please bring back, If Loving You Is Wrong. I was really enjoying this show.

Bring it back please!!!! Awesome show

Please come back with season 5

I would love to see If Loving You is Wrong stay on until all the questions are solved! It is so irritating when a show ends leaving everything hanging. I have been watching this show since the 1st episode & look forward to many more. Love it!

We have really enjoyed if loving you was wrong…please dont stop at Jennifer we are on the edge of our seats….really need to finish this out and make sure Eddie and Randal get what they deserve..

I love watching this show and certainly hope it continues! Come on people speak up!

I really hope If loving you is wrong will be renewed for season 5. I don’t like watching reality shows, I think they just a waste, I don’t want to see folks & their issues. I’m still upset about To close to home & For better or for worst being canceled. Thx