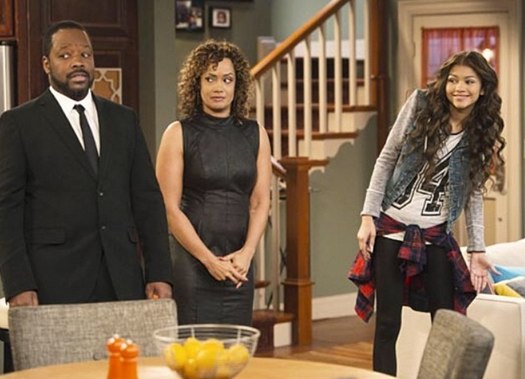 Production begins this summer and the series is expected to premiere early next year.

Popular actress and recording artist Zendaya (“Dancing with the Stars,” “Shake It Up”) will headline and co-produce a new series for kids and families, the live-action spy comedy “K.C. Undercover.” It was announced today by Adam Bonnett, Executive Vice President, Original Programming, Disney Channels Worldwide. The multi-camera series, executive-produced by Rob Lotterstein (“Shake It Up”), begins production this summer in Los Angeles for an early 2015 premiere on Disney Channel.

The comedy focuses on K.C. Cooper, a high school math whiz who’s training to be an undercover super spy, following in the footsteps of her parents. Each episode finds the Coopers balancing typical family issues while performing undercover missions to protect the country.

Bonnett said, “Zendaya and Rob Lotterstein are a powerhouse combination to produce Disney Channel’s next action driven sitcom. This show has all of the Disney Channel attributes – family, friendship, humor and heart all from the point of view of an incredibly talented and relatable teenage girl.”

Zendaya became a global star through Disney Channel’s series “Shake It Up,” and she went on to capture the hearts of viewers on ABC’s “Dancing with the Stars.” She next stars in the Disney Channel Original Movie “Zapped,” premiering Friday, June 27 (8:00 p.m., ET/PT). Her debut album, “Zendaya,” on Hollywood Records, yielded the platinum hit single “Replay.”

Lotterstein said, “I’m excited to be working with Zendaya again. I’ve worked with her since she was 13 years old and have witnessed her blossom into such a beautiful, talented and funny actress. She truly kicks butt in this series – literally and figuratively,” noted Lotterstein.

“K.C. Undercover” was created by Corinne Marshall and is executive-produced by Rob Lotterstein. Zendaya is co-producer. It is a production of It’s A Laugh Productions, LLC.

Disney Channel is a 24-hour kid-driven, family-inclusive television network that taps into the world of kids and families through original series and movies. Currently available on basic cable in over 99 million U.S. homes and to millions of other viewers on Disney Channels around the world, Disney Channel is part of the Disney/ABC Television Group.

What do you think? Will you or someone in your home check out this new series?

Please don’t end the show I love this show and

Please don’t end K.C undercover that the best show ever…. It the only show that me and my 6 sister watch together and agree with please don’t let them end this show

My friend said the zendaya is so sexy and hot

Zendaya is so sexy

Hey, zendaya I love your dancing I dance to but you are the reason i dance I love kc undercover and you and me have a lot incommon!!!!!!

I am watching this now too niema

i LOVE this show

I love k.c by portia