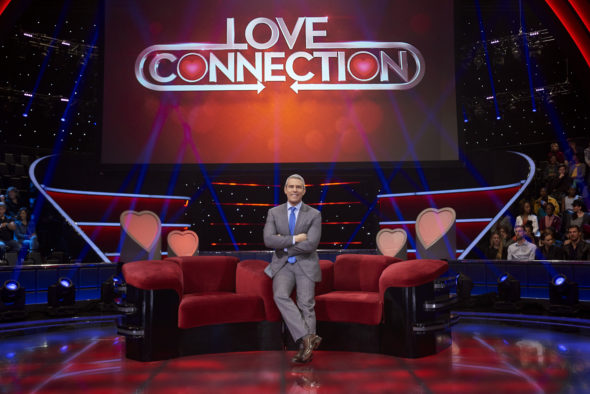 Is love still in the air? Has the Love Connection TV show been cancelled or renewed for a third season on FOX? The television vulture is watching for the latest cancellation and renewal news, so this page is the place to track the status of Love Connection, season three. Bookmark it, or subscribe for the latest updates. Remember, the television vulture is watching your shows. Are you?

A FOX dating game show, Love Connection features single people searching for love and romance. During the hour, host Andy Cohen asks the participants or “Singles” to explain what they want in a potential “Match,” and why they have had a hard time finding someone, so far. The Single and each potential Match also discuss their dates. Eventually, the Single chooses one person to take along on a romantic getaway.

The second season of Love Connection on FOX averaged a 0.47 rating in the 18-49 demographic and 1.58 million viewers. Compared to season one, it was down by about 31% and 33%, respectively. Find out how Love Connection stacks up against the other FOX TV shows.

Will FOX cancel or renew Love Connection for season three? The ratings are way down so I think it could be cancelled. However, it makes a good companion for Beat Shazam (which does a bit better) so it will probably be renewed. I’ll update this page with breaking developments. Subscribe for free Love Connection cancellation and renewal alerts.

2/27/2019 Status Update: Despite earlier reports to to the contrary, Love Connection has been cancelled. Details here.

What do you think? Are you surprised that the Love Connection TV show was cancelled? Do you think FOX should have renewed this TV series, instead?

Please allow love connection to have 1 more season & if the ratings don’t pick up then cancel it, my friends & I love this show & I have a lot of friends. Pls. Think seriously about it bc it means a lot to us. I’ve 57 yrs. Old & have been widowed twice. TKS for your time. Sincerely Sue Zanne Culpepper

PLEASE renew Love Connection! Love Andy – he is so entertaining!

Please renew the love connection and for Andy to host it. Thank you

please don’t cancel Love connection.It is so much fun to watch and guess outcome.Need more of this and less drama a nd violence!

Please renew Love Connection for season 3. I want to see more of this show. Thank you for your consideration.