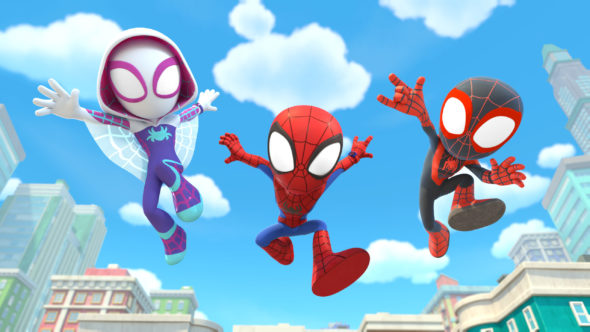 Marvel’s Spidey and His Amazing Friends has a premiere date for its second season. Disney Junior has also released a new trailer teasing the series’ return. The animated pre-school series has already been picked up for a third season.

Disney Junior revealed more about the return of the animated series in a press release.

“Season two of the hit web-slinging preschool series “Marvel’s Spidey and his Amazing Friends,” from Disney Branded Television, premieres FRIDAY, AUG. 19, with a simulcast on Disney Channel and Disney Junior (8:30 a.m. EDT). An initial batch of episodes will also be rolled out on Disney+ and on-demand platforms this fall. In anticipation of the new season, which features a “Glow Webs Glow” storyline, a collection of 10 animated shorts introducing our trio of young Super Heroes – Peter Parker, Gwen Stacy and Miles Morales – to new friends and baddies launches MONDAY, JULY 18, on Disney Channel, Disney Junior, Disney Junior YouTube and Marvel HQ YouTube and will be available on Disney+ beginning Aug. 17.

The series, which was recently picked up for a third season, is the #1 most-watched new preschool series among Boys 2-5 and has amassed over 383 million views across Disney Junior and Marvel HQ YouTube channels since its August 2021 launch.

A new “Glow Webs Glow” digital single from the series’ songwriter/composer Patrick Stump (Fall Out Boy) was released today by Walt Disney Records. A link to the music video can be found here. Stump will also guest star as a concert announcer in an episode debuting later in the season. Joining him and the other previously announced guest voice cast for season two – which includes John Stamos (“Big Shot”) as Iron Man/Tony Stark and Sean Giambrone (“The Goldbergs”) as Ant-Man – is Bindi Irwin (“Crikey! It’s the Irwins”) as oceanographer Isla Coralton and Scott Porter (“Friday Night Lights”) as Gwen’s dad, George Stacy.

Extensions for the series include an assortment of children’s books from Disney Publishing Worldwide and the recently released “My First Comic” from Marvel Press; products including toys, apparel and home items, with new toy lines releasing soon from licensees including Hasbro, Jazwares, LEGO and more; and a digital soundtrack from Walt Disney Records. This summer, Disney Junior teamed up with Starlight Children’s Foundation to deliver packages filled with a variety of “Marvel’s Spidey and his Amazing Friends” products, including toys, activity packs and books from the popular series, to children’s hospitals across the country. Additionally, characters from “Marvel’s Spidey and his Amazing Friends” will appear live for the first time in the upcoming “Disney Junior Live On Tour: Costume Palooza,” launching Sept. 2 with stops at more than 80 North American cities throughout 2022.

Check out the preview for Marvel’s Spidey and his Amazing Friends below.

What do you think? Are you excited about the return of this Disney Junior animated series?