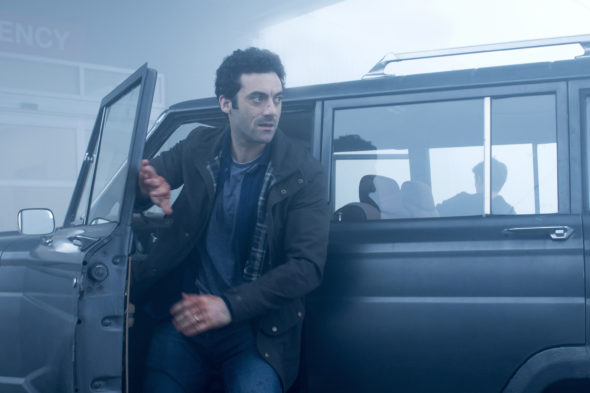 It seems the fog has burned off. Spike has cancelled The Mist TV show after just one season. Based on the Stephen King novella, The Mist first premiered on Spike TV on June 22, 2017. The Viacom-owned channel will rebrand as “Paramount Network,” in early 2018. A few months prior to its first and only season debut, Kevin Kay, president of Paramount Network, TV Land and CMT said the new TV series had “potential,” and that they would renew it for season two, if the first season found “success” on Spike.

The Mist: A Look at the Ratings

The first season of The Mist averaged a 0.14 rating in the 18-49 demographic and 462,000 viewers. Because The Mist was the cable channel’s first original scripted series, we don’t have ratings data from other Spike TV shows to which we can compare it.

Deadline has confirmed The Mist cancellation with Spike.

What do you think? Did you watch the first season of The Mist TV series? Should Spike have cancelled or renewed it for a second season? Let us know, below.

Please ring the mist back. I LOVE ❤️ IT. I still want to see more and more. I was so excited until I find out is cancelled. I don’t want it to end so soon. It have an interesting tittle “The Mist”, Please bring it back.

I caught it on Netflix like most of the others here, I’m surprised it was cancelled. Had potential!
I’d sign a petition for a second season.
Let’s make it happen!!!!

I enjoyed the series and never knew that it was on spike channel. I think their should be a season2 s d Netflix should pick it up. It was definitely a nail biter and I tried to limit my watching episodes but ended up finishing in 3 days. It was
That good

I loved the show. Wanting to see season 2. Please bring the Mist back it was very interesting

I loved the Show, yeah there were some flaws but overall it had real potential for at least another 1 or 2 series to finish the show off. Even the greatest TV shows have bad episodes/series especially when starting off but they got better and better because they stuck at it.
I only got to see this show on Netflix because i dont have cable/access to spike/paramount channels so if they made it available to more people it would have got more viewers.
Bring it back and at least finish off the show rather leaving it on a cliff hanger!!

Just finished watching season 1 and told my bf about it and we got so into it, I looked up so see if theres a second season and was so dissapointed to see that they canceled :/ please make a season 2 they even have a petition on a different website to bring it back please >< !!!!

Seriously! From the looks of the comments many recently binge watched it, probably on Netflix, like I have. Honestly, Netflix should just pick it up, I didn’t even realize it had aired on Spike. However, on Netflix it seems to be making a splash!

Season 2, bring it, come on!!! Probably watched more now on series link than when aired- so viewing figures should be much higher.

I seriously believe that we need a season 2. The show left off on a cliffhanger and there are so many thoughts and possibilities that I can’t stop thinking and I need a season 2.

I just watched the series and I fell in love. I think this series is perfect for my age group (18+) and older. The series was so good and I need more. As soon as I finished I told my mom and friends they need to stop everything else they are watching and watch The Mist asap. Please bring thing back!!!!

Same thing I watched it and am now in love but I was very upset when I found out that it was being canceled.

Why did you air season one and not ending it?? At least do another season of 10 episodes to end the trama and not leave us like this!!!!!! Greetings from Malta.

I just finished ss1 in 1 day then i found out that there will be no ss2, so dissapointed with the news.

I just started the show and i cant believe u’d show season 1 knowing there will be no season 2..UNBELIEVABLE

Me too, greeting from Germany