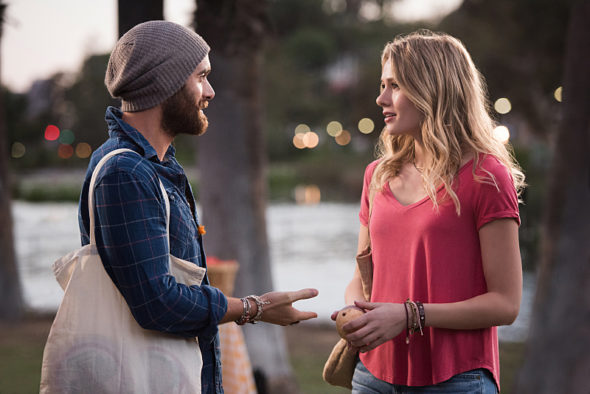 I just finished watching the entire show on Netflix. Subsequently when looking up who the stars were I discovered it was cancelled. That is too bad because it was lighthearted and not filled with sex and vulgarity like too many shows in today’s terrible tv world. Tori Anderson is adorable and Joshua Sasse is very attractive as long as he keeps his hair. When there was an episode of him with a partially shaved head he looked terrible. The last episode was very good with the cliffhanger of the doctor and Evie that could have gone into an entirely new… Read more »

soooooo sorry this show was canceled. Loved it and hope it returns.

A quality and unique program. I would love to see it renewed and not end on a cliff hanger. Followed every episode… please reconsider.
Thank You

Please bring the show back. It’s not to late to reconsider. If not, is there a possibility that Netflix might produce it ? CW please reconsider. Thanks.

We think it’s so rude that this show was cancelled. It left us wanting more and with so many unanswered questions. Please bring it back. We loved the writing and the actors. It was one of cleverest shows we’ve seen in a long time and it is our opinion that it made us better people because it made you think about how you want to live out the rest of your life .

I LOVED this show, it made you think of life differently, like what if it was our last few months ect. what would I do and I have changed the way I think. I wish they would leave shows on that are happy and good on!!! But no you have to leave crap on that’s nothing but sadness and crime and hurting other people!
YOU SUCK TV NETWORK!!!

Loved this show. My husband and I watched it together, he liked it and added it to his very short list of tv shows. Hope it is picked up by another network. It was so good and fun to watch.

Loved it It was funny and light hearted Always put me in a good mood. Loved the actors they were great Xavier and evee. We’re perfect I really wanted the show to continue and see where life takes them. Was very disappointed in this getting cancelled. It was our favorite show . Was hoping Netflix would pick it up. I’m please please please

Love it! Hope it renews.

Love it! It’s nice to see a show that makes you feel good! What a breath of fresh air. If CW isn’t smart enough to renew it, hopefully Netflix will!

if the CW doesn’t renew it, Netflix needs to snap it up! Original, quirky, funny, and a rare find nowadays, positive! I didn’t even know it existed, until I found it on Netflix! Why didn’t the CW promote it better? Hoping for a renewal!

The dance competition scene alone in episode 11 is worth the price of admission.

Netflix earned my $9 this month by way of “No Tomorrow” alone. I loved it and so did everyone I nagged to watch it. Hope it gets renewed for season two or we will be frozen forever with four and a half months to go until . . .

I binged watched this show this weekend with my college age daughter and WE LOVED IT! All the characters are terrific – great writing – heartwarming and funny AND SEXY!!

I dound this shiw on Netflix and binged watched it. I sure hope that either CW will renew or Netflix will take it over. Loved it!!
Ps. What happened to Evie’s family? I thought they were hiliarious.