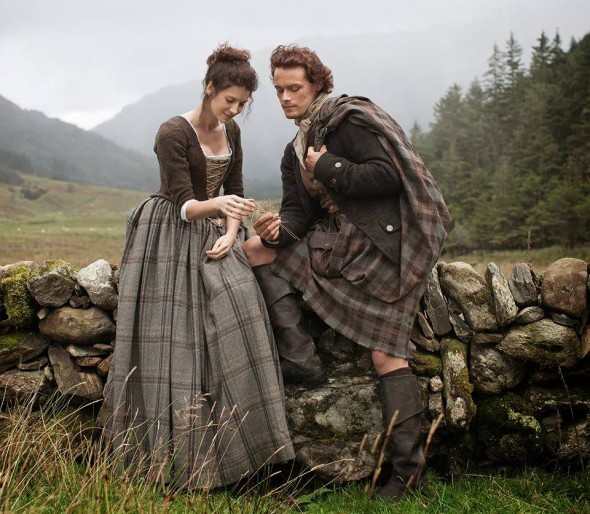 TV show description:
This fantasy-dramatic TV show is based on the series of Outlander novels by Diana Gabaldon and takes place in both the 1940s and the 1740s.

Quick-witted and beautiful Claire Randall (Caitriona Balfe) is a married combat nurse from 1945 who finds herself mysteriously thrown back in time to 1743 Scotland. Claire and Jamie Fraser (Sam Heughan), a chivalrous and romantic young Scottish warrior, are forced to marry to save her life. A passionate affair is ignited that tears Claire’s heart between two vastly different men in two irreconcilable lives.

Jamie is intelligent, principled, and (by 18th century standards) educated, and worldly. He has a tenderness and compassion that stands out in contrast to his contemporaries. A natural leader of men, he has no political ambitions or desire for battlefield glories. Instead, he wishes to remove the price on his head and return to his family’s ancestral farm.

Claire’s husband in her home time period is Frank Randall (Tobias Menzies), an intellectual and an academic. He served in British Intelligence section MI6 during the war as a spymaster, and was responsible for sending men on dangerous missions — some of whom never returned. With the war now over, he’s looking forward to a new career as a historian at Oxford when his wife mysteriously disappears in the Highlands.

Jack Randall (Tobias Menzies) is a Captain in the English Army back in 1743 who has been posted in Scotland during a time when rebellion is in the air. As an officer in an occupying army, he’s seen and done terrible and horrific things in the undeclared war in the Highlands. He’s also a sadist who finds joy in the torment of others — a secret side to himself that he loathes and also has an unhealthy obsession with both Claire and Jamie.

A skilled and experienced warrior, Dougal MacKenzie (Graham McTavish) is the War Chieftain of Clan MacKenzie. His older brother Colum is the ruling Laird, but Dougal is his loyal right hand and the true muscle. He is courageous on the battlefield and is feared by many.

The Laird of the MacKenzie clan is Colum MacKenzie (Gary Lewis), Jamie’s maternal uncle and brother to Dougal. Colum suffers from Toulouse-Lautrec Syndrome, a degenerative disease that renders his legs immobile at times, and fills his days with a great amount of pain. Unable to rule by brawn, he must rely on his cunning and intellect to lead his clan.

Mysterious and dark, Murtagh Fitzgibbons (Duncan Lacroix) dutifully watches over his godson Jamie. Although a reserved man, he’s a very loyal godfather, and lives his life by a strict a code. And he’s more than happy to let his reputation and fists do the talking.

The wife of the procurator fiscal and a good friend to Claire, Geillis Duncan (Lotte Verbeek) has such advanced knowledge of herbs and plants that many believe she is a witch. Geillis is a master manipulator.

What do you think? Do you like the Outlander TV show? Do you think it should be cancelled or renewed for another season?

love it, do not cancel

Love it, do not cancel.

THIS IS ONE OF THE BETTER TV SERIES. DO NOT CANCEL. I WANT TO KEEP WATCHING THIS SERIES. I LOVE IT!!!!!!!!!

OUTLANDER IS ONE OF THE BETTER TV SERIES. PLEASE DO NOT CANCEL IT.
I’M LOOKING FORWARD TO A SECOND & THIRD SEASON FOR THIS SERIES.

Love the series I hope it continues

Absolutely LOVE the show. It should continue!!!

This should continue for the next 8 seasons. Diana does have 8 Books!

LOVE this series! Sam really conveys the heart of Jamie. Wish it had started years ago and that we had years left to enjoy. At the pace they are covering now, should take about 10 years worth of shows to cover the subject matter – good news!

Seriously, SERIOUSLY! She was a combat nurse that saw all kinds of horrific situations in WWII and she fainted looking at a boy with a bloody ear??

Oh – you missed the point. She fainted intentionally to distract people away from Jamie pulling the spike out of the boy’s ear.

Silly me, I sure missed that one didn’t I. Now knowing the boy had to tear his ear away himself as the rule made more sense to me now that she was indeed trying to distract to help the boy. I will keep quiet now. 🙂

BTW, it is a great show indeed. Glad to hear there will be a season 2.

Silly me, I sure missed that one didn’t I. It certainly was that she was creating a distraction to help the boy. I will keep me self quiet from now on. 🙂

BTW, it is indeed a great show, and glad to hear there will be a season 2.

Gizmondo, it wasn’t expressed literally in the show, but (in the book) and I hate to say it, Claire and Jamie manipulated the situation to free the boy, by pretending to faint so the crowd would be distracted, and Jamie would pull the nail out of the post.

Thanks for pointing this out to Gizmondo. Don’t know how he (or she) missed this.

She didn’t. That was just a ploy to enable Jamie to rescue the boy.

This is so exciting. I watch episodes multiple times.

Finally! Loved the premiere and hope the series continues through all the books. Great adaptation.

Loved the books and just watched the first show of Outlander the series , it was great can’t wait for the next week’s show !!

I have been looking forward to seeing Outlander books made into movies or a series for more then a decade. Finally! And the premiere was just fabulous!