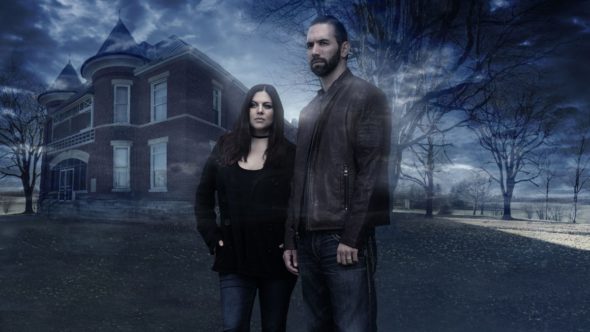 Get ready for season three of Paranormal Lockdown. The season is now filming, and it will air next year. The season will feature the first ever investigator of the Jim Beam American Stillhouse.

Destination America revealed more about the return of this series in a press release. Check that out below.

“Production is currently underway for season 3 of PARANORMAL LOCKDOWN, starring famed paranormal investigator Nick Groff and beloved paranormal researcher Katrina Weidman as they spend an unprecedented 72 hours locked inside legendary haunted locations. “Living” at these haunted locations, Groff and Weidman believe that the longer they stay, the more the spirits will communicate with them and the more information they can gather about the unknown. As a top-performing series on Destination America, PARANORMAL LOCKDOWN’s third season is currently in production and will premiere in 2018.

This season will serve up an extra treat for fans with the first-ever televised paranormal investigation of the Jim Beam(R) American Stillhouse in Clermont, Ky., home of the world’s #1 selling bourbon. An abundance of spooky history has been reported on the property, including unusual activity from their Stillhouse to their legendary Warehouse D, sightings of a woman in the windows at the onsite T. Jeremiah Beam home, and a known prankster, Cans Hall, who doesn’t shy away from interaction.

Additionally, season 3 will bring the return of a familiar location, the Monroe House in Hartford, Ind. In the second season, Groff and Weidman unearthed something sinister in a crawl space underneath the home – skeletal remains. The question of what is haunting the Monroe House is now more of a mystery than ever. They travel back to the historic location and consult with a biological anthropologist to seek a better understanding of what’s on the property and potential connections between the remains and the continued hauntings.

Can’t wait until 2018 for more PARANORMAL LOCKDOWN? Join Nick Groff exclusively during the network’s GHOSTOBER stunt, a celebration of Halloween all month long, with various LOCKDOWN countdowns. Available now at Destination America GO, Groff counts down his top-five scariest locations where he and Weidman have ever had to film for the show. Additional features include countdowns of their best evidence, the worst places they’ve had to sleep, and more humorous moments with Weidman caught on tape.

Will you see the return of Paranormal Lockdown? Tell us what you think.

Take off Zack and put back on paranormal lockdown they are true investigators . There show is enjoyable and no big whining Zack seems like he’s just puts on a big show of acting not actual investigative work. In which in my opinion Nick made GA . Now GA is just acting to me I will not continue to watch GA anymore. Been waiting for paranormal lockdown since season 2 was over. Shame on you they are the best.

I think is DISGUSTING that Discovery, Inc., has HELD THIS SHOW UP! This is beyond belief, especially after it became the Highest Rated Paranormal Show for them! You try to write DI, Inc., and all you get back is an automated response, “We’re sorry, we don’t have the STAFF to answer your Question!” OMG, I am so Sick & Tired of ALL of Discovery, Inc. has for this show! Just PUT PARANORMAL LOCKDOWN back on!

No your not going to air it. I don’t believe it. Season 3 and 4 have been shown in the UK. I Mark Mondoro will spend every minute if I found out you held out on the airing for money. You don’t know me. Remember that. Take that show and shove it up your ads. I hope your network goes under. You suck. I hope Nick tells you to scratch. The fans will remember. If we find out it was you, watch how fast your channel gets banned. Don’t air it. Nobody cares anymore.

I think Destination America is a sell out…..they went with whining Zac, who forgets that Nick made him what he is. ZACH has demonstrated though his comments about Nick that hes no professional when it comes to seeking the teuth over life and death. Look at his museum, look at the dark side he’s gone to…he went from looking for the “truth’ to seeking demons. Putting Aaron, Billy, and Jay’s lives and souls at risk. Next week is the last week i will watxh G.A. unless Teavel Channel Stands up and gives Nick and Kat their due rights…again….without Nick in… Read more »

Sadly, you’ll probably never see them again state side.ZACH AND G.A. don’t want to seek the truth…they want to become demon hunters….and it sells. They should welcome Nick and Kat’s investigations. But nope…ZACH wants to be a little whiney ***** and attack Nicks success. Where is your scientific interest #ZachBegginsformoreattention

Please bring back Nick and Katrina I look through all the channels looking for them. What’s up I read today something about viewers voted I note any fans heard anything about voting.

Corection from previous comment since I cannot edit. Suppose to say Looking forward to next month not I’m king whatever. Lol stupid phone and I’m sticking to that.

I have been waiting and waiting for season 3 in America and still no exact date so I’m assuming it wI’ll be In Oct since you said they would be there on American Destinations Ghostober Fest. Nick & Katrina are my favorites. Anyways I’m king forward to next month guys. See ya there and I expect a good scare. Lol

Still holding your breath??? DESTINATION AMERICA SHOWED ONE COMMERCIAL with Nick and Kat, then hung them out to dry as they cut Nick and Kat from the line up….they want satan hunters…not scientific evidence, demonic material sells. Nick and Kat have been continually shot down by ZACH as he whines about Nick using his connection to the ORIGINAL CREW. ZACH IS GOONG PLACES DEMONIC. As shown when Nick questioned ZACH’S sanity for wanting to investigate the Exorcist house. AARON….I’m ashamed of you. You ran in the pilot and hid in the car….now you sell out your friend Nick?!?!??! Who needs… Read more »

Their problem is ZACH BEGGIN FOR ALL THE DEMONIC ATTENTION HE CAN GET…. IT SELLS AND DESTINATION AMERICA SOLD OUT ON NICK AND KAT

TLC and DESTINATION AMERICA sold out to demonoc hunters, and sell outs to their friend Nick for his protests of investigating the Exorsist house.

Lets go already, what exactly is the hold up with Season 3 of Paranormal Lockdown?

Agreed. The fact that destination America posted that they were “ccompleting production” on season 3 is obviously a ridiculous statement. We have yet to see season three(as of October 6, 2018) and MANY PAY a lot for destination America due to it being a high premium package channel. At least make the episode available for purchase on you tube. American viewers made Groff famous. Just saying!

Not according to Zach BEGGIN FOR ALL THE ATTENTION…..HE MADE NICK FAMOUS YET HE FORGETS THAT NICK WAS CO- PRODUCER OF THE SERIES G.A.

Hey Mike , Nick sold the rights to his work to DA. Nick sold all of us out. I personally hope they both go in a location and it gets swallowed to nothing. Nick is a liar this has nothing to do with Zak. He’s on gravel Nick was on Destination America. Nick screwed up. Stay in the UK.

Ok….I suspect that Gaimann wrote the 3rd Testament and there’s really just one god that controls all television; that being said we have indeed created an American God. So, deity of my HD—-Josh Gates is incredible — especially when cameras are rolling and life is happening. Josh’s asides to audience and crew and extempraneously creating a show is what we love. Josh just narrating doesn’t use all that talent we can worship. Secondly, I see what vulgarities attack paranormal shows but let me clear a misconception up —— MANY OF US, YES, EVEN THOSE OF US OVER 50 AND FAR… Read more »