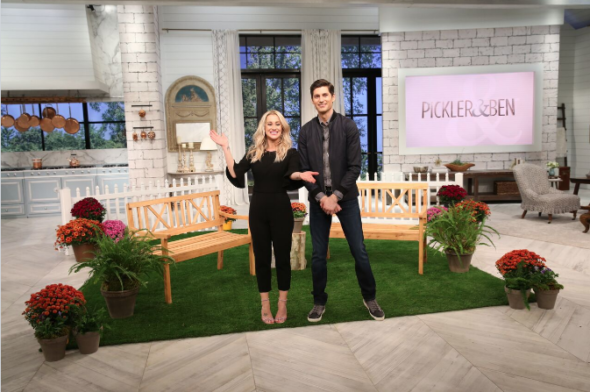 Are you a fan of Pickler & Ben? This week, it was announced season two of the syndicated TV show will debut on September 17th.

Hosted by Kellie Pickler and Ben Aaron, the daytime talk show “highlights feel-good stories featuring guests from across the country; zany comedic bits where Kellie and Ben demonstrate that they are “all-in” on entertaining the audience – from goat yoga to fencing lessons; and cooking segments with celebrity chefs including Cat Cora, Carla Hall, Richard Blais, Gail Simmons, Duff Goldman and Sunny Anderson.”

Season two of Pickler & Ben premieres on TV stations across the U.S. on September 17th.

NASHVILLE – Emmy-nominated daytime talk show “Pickler & Ben” returns for its second season on September 17th. The show is quickly becoming a household name and will be distributed in 175 markets – a 483% increase over the 30 markets at the launch of season one. (View the complete and most up-to-date list of markets where “Pickler & Ben” airs here.)

“Pickler & Ben,” which is not your typical talk show, highlights feel-good stories featuring guests from across the country; zany comedic bits where Kellie and Ben demonstrate that they are “all-in” on entertaining the audience – from goat yoga to fencing lessons; and cooking segments with celebrity chefs including Cat Cora, Carla Hall, Richard Blais, Gail Simmons, Duff Goldman and Sunny Anderson. (View the 2018 season promo reel here.)

Executive producer Faith Hill and the show’s Creative Director, Kelli Bishop, spent the summer curating fresh new looks for the set, with Faith hand-picking many of the items. Mixing elements of traditional and modern design, Hill and Bishop want the set to create a feeling of love and comfort so every guest feels like they are being welcomed into our home with open arms.

“I love everything about this show, especially the opportunity to shine a light on people who are doing amazing things,” Kellie Pickler said. “And working with Ben is like working with the big brother I never had.”

“This is the show I’ve always wanted to do and I hope we get to do it for decades,” said Ben. “Working with Kellie is unique, unpredictable and more fun than I could have ever expected.”

“Kellie and Ben’s enthusiasm is infectious,” said creator and executive producer Lisa Erspamer. “We never know what’s going to happen on set from day to day, making this show fun for those of us working behind the scenes as well as for the viewers! We can’t wait to deliver more laughter, love and endless excitement to audiences across America this fall!”

“From the moment they were cast, we knew we had lightning in a bottle with Kellie and Ben,” said Brian Lawlor, president of Local Media for The E.W. Scripps Company (NASDAQ: SSP), which produces the show in partnership with Hill, Erspamer, co-founder of Happy Street Entertainment, and Jason Owen, president and CEO of Sandbox Entertainment. “It’s a testament to their talent, as well as the hard work and insight of the entire ‘Pickler & Ben’ team and our partners, that this show is more than tripling the number of households it’s reaching in season two.”

To stay up to date on episodes and get a behind-the-scenes look at Kellie and Ben in action, follow “Pickler & Ben” on Facebook, Twitter, and Instagram. Find out when and where the show airs and request tickets to a taping at picklerandben.com.

What do you think? Have you seen Pickler & Ben? Will you watch season two?

I love Pickler and Ben and will continue to watch it whenever I can. If I had a way to record it, I would record every episode.

This has been a rough spot for cBS, but I think you finally found a winner! I watched it in the beginning and thought “ok, another shot that won’t work, but I find myself watching this show instead of the competition. They are both very entertaining, and Ben seems willing to do ridiculous things! Finally U think you have a winner!

I love this show!! After a long day at work I enjoy sitting down and relaxing to watch Pickler &Ben. The show makes me laugh, cry (happy tears) and at times open my eyes up because you just go about your everyday activities. I love that there are no politics. It’s set to record EVERYDAY! I pin a lot of the recipes which I’ve tried! I started to watch it because im a HUGE HUGE FAN of Faith Hill(love her) but after watching I have completely fallen in love with Kelli and Ben. They are wonderful together. Wonderful show! Please… Read more »

Attended the afternoon taping on Sept. 5th and loved every minute of the show. They featured a great list of guest and Kellie & Ben kept the audience laughing the entire show. Pickler & Ben work extremely well together making the show the success that it is. Looking forward to going again and hoping their show is renewed for many years to come.

Where can I watch Pickler and Ben in SF, Ca … I have direct tv

Who? Never heard of them.