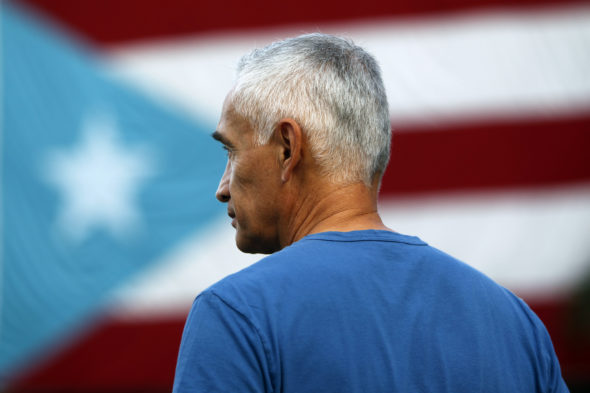 Real America with Jorge Ramos is coming soon to Fusion. Ramos will interview big names on the new series. The new series will premiere on November 21.

Fusion revealed more about the new series in a press release. Check that out below.

“From the changing face of America to the upheaval of the status quo in Washington, America is in transition—and no one is more equipped and experienced than Jorge Ramos to examine the forces driving this change. In his new FUSION series, Real America with Jorge Ramos premiering Tuesday, November 21 @ 10PM, award-winning journalist Jorge Ramos brings his passion, curiosity, and fearless brand of journalism to bear as he profiles the people who are breaking down barriers and shaping our collective future. In each episode Ramos asks provocative questions of the disrupters, dreamers, dynamic-thinking Americans who are on the cutting edge and making a difference in this uncertain time.

“Jorge is the quintessential American—a proud, hardworking immigrant for whom the promise of America is tangible. His curiosity is infectious and this series, like all his projects for FUSION, will further elevate the voices that are writing the next chapter of our nation’s history,” said FUSION President Daniel Eilemberg.

In the premiere installment, Ramos travels to Puerto Rico to measure the impact of the disaster. Ramos explores what life is really like in Puerto Rico weeks after Hurricane Maria, and asks why it has taken so long for these U.S. citizens to get much needed aid and electricity. He interviews those struggling to live without basic resources, along with the Mayor of San Juan Carmen Yulin Cruz—who has challenged President Trump on response efforts—the Governor Ricardo Rosello, and others who are providing aid including former New York Yankee and Puerto Rico native Jorge Posada and his wife Laura.

Upcoming episodes will feature revealing profiles of actor and comedian John Leguizamo, Governor John Kasich (R-OH), artists and activists Ai Weiwei and JR, and world-renowned brain surgeon Dr. Alfredo Quinones-Hinojosa, among others. All of them are finding new ways to understand what it means to live in America today, and to speak out in their own ways.

Real America with Jorge Ramos is a FUSION original series. Jon Meyersohn has joined FUSION as the executive producer of “Real America with Jorge Ramos.” Meyersohn is a veteran television news producer who has reported award-winning stories from around the world. As a former senior producer for ABC News, he has worked alongside some of the leading correspondents and anchors in broadcast journalism today. Most recently he was co-executive producer of “Road to 9/11,” a six-hour series for History on the roots of the September 11 attacks. Prior to that he served as co-executive producer for the second season of “Years of Living Dangerously,” an Emmy-award series that aired on National Geographic.

From going deep on cultural obsessions to telling impactful stories that matter, FUSION is a network that serves up a unique blend of enriching programming that reflects the shared passions and values of America’s diverse youth.”

Check out a preview for the series below. Will you check out this series? Tell us what you think.