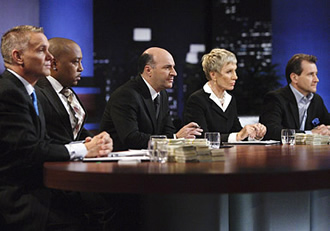 TV show description:
In these tough economic times, it’s difficult for someone who possesses an invention or owns a small business that’s poised for growth to get a loan for a risky venture.

Some have been laboring on their ideas for years or even decades. They’ve invested large amounts of money and are often being pressured by friends and family to throw in the towel. Others have simply never had access to the means to live out their dreams, until now.

Enter the “Sharks” — five multi-millionaires who lifted themselves up by their bootstraps to make their own entrepreneurial dreams come true and turned their ideas into empires.

Each episode, ambitious entrepreneurs from across the country present their breakthrough business concepts, products, properties and services to the panel of ruthless investors. Their goal is to get these merciless moguls to invest their own dollars in the concept.

Convincing real-life millionaires to part with their own money is no easy task, because when the idea is poor, the Sharks will tear into the ill-prepared presenters and pass on the idea with a simple, “I’m out!” — sending them running for the exit.

But these Sharks aren’t just out for blood, they too have a goal: to own a piece of the next big idea. Entrepreneurs will often be asked to give up a large percentage of their companies’ equity in order to get the investment they need from one or a combination of the Sharks.

But, when the Sharks hear a really top-notch idea and more than one of them wants it for themselves, a war between them erupts. The once-desperate entrepreneur can rejoice when the Sharks reveal their true interest in the product and can hopefully negotiate for a bigger piece of the pie.

I look forward to Shark Tank every Friday!!!!!! It even holds my husbands’ attention. Ditto to all the other comments!!!!!! Please don’t cancel!!!!!! I will be looking for repeats on Saturdays. Oh, I forgot I tape it every week!!!!! lol.

That they’re even considering cancelling this show is a sad indictment.

[…] sharks are back…” or, at least they will be. ABC is renewing Shark Tank, their Friday night reality show, for a full fourth […]

This show is a real winner. Please don’t do anyhing stupid like cancelling. Thanks!!!!

I THINK THIS SHOW IS WONDERFUL. THE PERFORMERS ARE AWESOME!! LOVE THE VIBE.

There are very few entertaining shows on anymore and this was GREAT! Please bring it back. It was also a very encouraging show for the people who need a little boost.

LOVE this show. Would greatly missit. Hope they all keep up the goodwork and the netwrk gives it a BIG chance

Shark Tank has got to be renewed for the next season! What a great concept in these economic times Please everyone..write in with your support!

I love this show i wish it was on every week, i am always searching and cany seem to find it. Does any one know if it is iver for the year and if not when does it come on

@kevin: There’s one episode left but it’s not scheduled and the show hasn’t been cancelled or renewed for next season. They play repeats on Saturday afternoons on ABC though.

What happened to all the POSITIVE COMMENTS…every single one of them was positive? Can’t deal with it MORONS?

@Judy: I think you’re thinking of the comments on this post: https://tvseriesfinale.com/tv-show/shark-tank-cancel-or-keep/

Please keep the Shark Tank on TV – it is my favorite show. Once people get a taste of it they will love it.