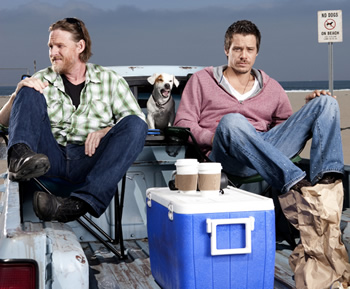 Though many critics loved the FX series, Terriers just couldn’t attract enough viewers to stay alive. FX has announced the TV show has been officially cancelled.

The series debuted to a 0.5 rating among the 18-49 demographic and 970,000 total viewers. When compared to other FX shows, that was a poor showing right from the start. The numbers went lower for subsequent episodes and the recent season finale attracted a 0.3 demo rating and 784,000 viewers.

FX President John Landgraf is expected to discuss the decision later today but ultimately the reason for the cancellation seems quite clear.

What do you think? Are you sorry that Terriers won’t be returning for a second season? Why didn’t it catch on? Was it simply a confusing title or something more?

Just discovered Terriers on Netflix. Give it another chance but with proper advertisements and a good time slot. Its nice to have a thriller without blood and guts splattered all over the screen in lieu of dialogue.

Found this show on Netflix and would LOVE to see more seasons!!! Bring it back!

Bring terriers backk i loved an it an its so stupid that fx cancelled it. Bring it back

I really liked this show

FX Canada channel keeps playing this series and we love it!! It is really disappointing that
this series was cancelled. It was a excellant show and just needed more advertising! Now we just get to watch more “reality” crap!! Great!!!

I remember a small bit of advertising for the show maybe 2 or 3 times. I said to my wife we should watch that because we love Donal Logue! But then we forgot about it. That was the main downfall of the show. I think FX set it up to fail from the beginning. Now a couple years later I stumble upon the show on Netflix I say ” Oh remember that I wounde if it’s any good” . I watched and it was fantastic! I think it would do good now along shows like Louie and Willard. Fx is… Read more »

I just now found out that Terriers won’t be returning, and I am SO UPSET! I’ve been waiting and waiting for season two. It was one of the best shows to ever walk the face of this earth. What is wrong that so many crappy shows stay on year after year, while a truly wonderful show like Terriers gets cancelled! Please bring it back!!!

i love terriers come back bring it back

As is the case with many other commentors, I stumbled across Terriers on Netflix and it became a marathon session for my husband and me! Logue is fantastic and perfect in the lead role as well as MRJ as his sidekick. Great casting! The writing is extremely good and the delivery of humor was spot on. A breath of fresh air for IQ’s above 80…..

i never heard of the show until I had the whole first series on netflix. Do more advertising to get it out. I loved te show. I bet most people would if they had ever heard about it. Great cast. Great writters.

I found this show on Netflix also and was instantly hooked. I was disappointed it wasn’t given a chance to acquire an audience. I was unaware of it when it was on TV. I also vote to bring it back for another shot.

I have netflix, i was searchng for terminator or something, I stumbled across this show by accident. Once I started watching it I was hooked, I gave it 5 stars. Very dissapointed there wont be a season 2. Bring it back !

How is it that I never new about this tv show . Thanks to Netflix I didt miss out on a good show.

Someone needs to pick this up! I agree…the marketing for a such a wonderful show was lacking especially for a show with such a nondescript title… Absolutely brilliant acting, wonderful characters and cleverly separate yet intertwining plot line. What a waste of a refreshingly clever series…