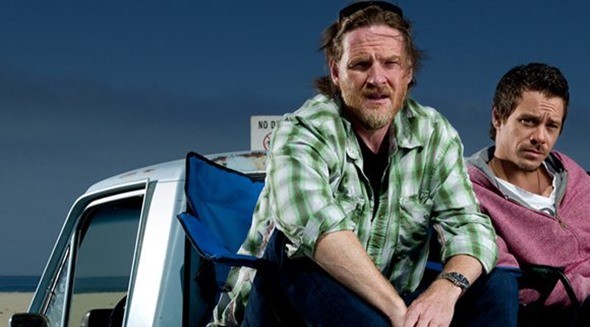 FX cancelled Terriers after only one season back in 2010, but Shawn Ryan says there may be a future for the beloved series. At this year’s TCA winter press tour, Ryan said the cast is ready for a Terriers reboot:

It would take somebody who’s a fan — I know that I was told anecdotally that the show did well on Netflix in repeats. If this Fox/Disney sale goes through — it was produced by Fox and so it will soon become a Disney property — maybe there’s someone over there that has been a secret Terriers fan for years who would like to do it. But I can say for Ted and myself and Donal and Mikey that we’re ready to step back into Terriers if someone wants to do it.”

What do you think? Have you seen Terriers? Would you watch a reboot?

I would totally love to see this show come back! I was completely hooked and sooo disapointed it was canceled!

Shocked that this show was cancelled. When y look at the shows that ha e got a second and third season that are nowhere near as good it makes me scratch my head in disbelief?

Please tell us if they chose to go to Mexico or prison. We here is season 2? Why did you cancel such an awesome show!!!!!!

Yes,I loved terriers back in 2010 wished they had never canceled it. Would love another couple of seasons of the show!!

Just finished watching the first season and was so disappointed there was only one season. PLEASE bring the show back!! I’m hooked and want more!!!

Terriers was my favorite show . I loved that show and was so disappointed when it was canceled. I couldn’t believe it was just gone. I wanted so much more.
If it came back I would watch it over and over . Actually I’m going to try to find it on hulu or netflix , fingers crossed.

My wife and I Just finished watching the tv series “Terriers” and we want more! Very funny and well done. Please bring it back for more seasons!