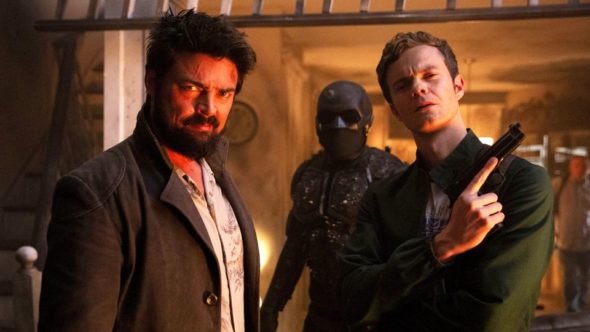 The Boys is returning for a fourth season, and viewers will see one familiar face and three new ones in the upcoming episodes of the Prime Video superhero series. Simon Pegg will return to his role as the father of Hughie (Jack Quaid). Rosemarie DeWitt will play Hughie’s mom. The roles that Elliot Knight and Rob Benedict will play have not yet been disclosed.

It was previously revealed that Jeffrey Dean Morgan, Susan Heyward, and Valorie Curry had joined the cast. Cameron Crovetti, who has recurred as the son of Homelander, was promoted to series regular.

Streaming on the Prime Video subscription service, the third season of The Boys stars Quaid, Karl Urban, Antony Starr, Erin Moriarty, Dominique McElligott, Jessie T. Usher, Laz Alonso, Chace Crawford, Tomer Capone, Karen Fukuhara, Nathan Mitchell, Colby Minifie, Claudia Doumit, and Jensen Ackles. The story unfolds in a world in which superheroes are more idolized than celebrities, and some of them are abusing their superpowers. After Hughie Campbell’s (Quaid) love becomes collateral damage to one of the Supes of The Seven, he teams up with Billy Butcher (Urban) and his gang of vigilantes called “The Boys.” Now they’re out to expose the truth about superheroes, and about Vought — the multi-billion dollar conglomerate that both manages the Superheroes and covers up their dirty secrets.

A premiere date for the fourth season has yet to be announced. Check out the casting announcements below.

What do you think? Are you excited to see season four of The Boys on Prime Video?