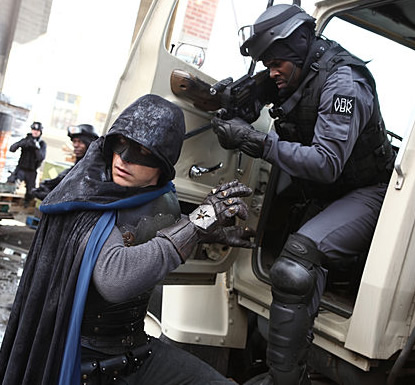 It looks like fans may have seen the final televised episode of The Cape last night. The NBC series has been struggling to get good ratings for some time and is one of the lowest-rated scripted serieson the network. Though it hasn’t been officially cancelled yet, The Cape is highly unlikely to be renewed for a second season.

A month ago, the network cut the first season from 13 to 10 episodes. When that happened, NBC also decided to delay the return of The Event by one week, presumably to allow the final two episodes of The Cape to air on February 28th. But that didn’t happen. Rather than pre-empt Chuck two weeks in a row (last night and next week), NBC just ran one episode of The Cape. Next week, The Event returns.

What about episode 10, the season (likely series) finale of The Cape? The network has apparently decided to release it online only. A small notice on the NBC site reads…

Flash: The creators of The Cape are prepping an exclusive episode just for online fans! Keep watching this site in the days ahead to see a full-length special episode.

There’s no word yet as to when the episode will be released but we’ll keep you posted.

What do you think? Does it matter to you that NBC won’t air the finale on television? Do you think it will be back for season two?

UPDATE: A network rep has confirmed that the finale will be released online only, sometime in March.

Pleasei need the final episode of the cape

I was stationed in Korea the whole time the show was on. I’d never have heard of it if not for Netflix. Network TV sucks because of commercials and you never know when the damn show is gonna be on next or what fruity station carries the next decent show. The cape was everything I always liked in a superhero series. Especially short.I saw 2 episodes of ssmall ville once and got lost. That was ten years ago. Now its got all kind of heroes but I’ll never know how lame it is because its not on Netflix. Screw the… Read more »

there are for certain a great deal of garbage shows on abc , cbs, nbc, and other subcultrul networks . I did entertain the carnival people they were indeed the CAPE. well this is my 2cents worth.

I liked the cape a lot. I hope it comes back. I want to see it to the end. Maybe they can do a few more episodes just to finish the show to the end. Great show! The trouble with the big bosses, they never know when they have a good show as when they do it goes off like this one and **** shows stay on for years!