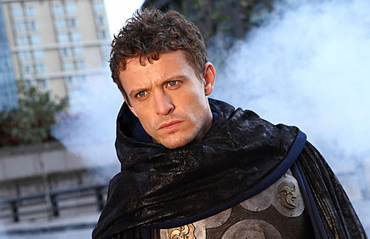 Here I am years later re-watching The Cape on net-flix and getting angry all over again at the pulled plug. I watched Iron Fist recently and aaaggghhh! But the networks gave it a chance. Why not the cape? We are now in an age of super heroes from Marvel to DC. Maybe it’s time NBC, what do you say? Bring Cape Back?

I enjoyed watching The Cape. It was good clean entertainment. To not complete the show and leave viewers hanging was disappointing to say the least. My wife and I watched the whole series on Net Flix and were very sorry to not see “Justice” for the families and villains. Shame on the network for not finishing what was a good clean show. It took years for Star Trek to catch on…..maybe some day……

I only found out about the show on Netflix .I believe with all of the networks ,good quality entertainment like this gets lost and people never get a chance to find out what types of entertainment are out there .this is one that certainly could have been a great hit if people only knew about it ! Although I feel the endgame’s episode was good it certainly did not conclude the series well.

Through the whole season I was waiting to see how The Cape gets back to his family and is happy, because that what all shows are right? BUT NO, I’m left extremly frustrated, knowing that watching the whole season was a huge waste of time! Thanks a lot NBC.

This was totally an awesome show with a horrible season finale. NBC should not exist anymore for cancelling and ending a show that way. It wasn’t even an ending. Hello NBC. What were u thinking? Oh that’s right, u weren’t. Very displeased with this network. These networks need to stop thinking about money and start thinking about doing the right thing, like the cape. Did they even watch their own show? They could’ve learned something. makes me sick to see a good show cancelled. What does a show need to be like to be respected? I’m done with this. It’s… Read more »

I too think it should not have been canceled , I never knew it was on TV . I found it on Netflix . I am a artist , I grew up drawing super heroes . This show was well done and well thought out . It’s just like NBC to do away with a show like this when we need something to take away the every day Bull crap .TV is suppose to be entertaining , why watch all that stupid reality drama . There is enough drama in our every day life with out watching some one else’s… Read more »

todays society needs superheros to look up too. not rap artist or vilolent teen pregnancy shows or movies i think with todays advances on life its was nice to finally see some good in telivision but im sure you cancelled it for another stupid singing reality show or stupid “follow a rich person around and watch them do drugs” reality drama

Watching a good series on NBC is no longer possible. This tv station does not deserve any loyal fans whatsoever. The worst station of all.

Summer’s problem is simply she has been typecast as a “sci-fi genre goddess”, so she gets offered sci-fi shows. And she likes sci-fi so she takes them. But sci-fi on BROADCAST networks rarely work. She should do sci-fi only on CABLE networks where they have a better chance to survive. She should also switch out from sci-fi to an action show or drama for her next choice. Something like the role Gabrielle Anwar has on Burn Notice would be perfect.

NBC SHOULD HAVE GIVEN THE CAPE ANOTHER TIME SLOT. ALSO, IT DIDN’T HAVE MUCH, BUT …. IT DIDN’T NEED ANY OF THE BAD LANGUAGE. (PARENTS I KNOW, AS WELL AS MYSELF DO NOT THEMSELVES (OR) THEIR KIDS HEARING IT). IN MY CASE, I MYSELF AS AN ADULT, ENJOYED THE SHOW BECAUSE IT WAS DIFFERENT. THE ACTING WAS GREAT BY THE ENTIRE CAST. I BELIEVE IF NBC HAD GOTTEN RID OF THE CIRCUS ROUTINE AFTER SEVERAL EPISODES, AND HAD THE CHARACTERS IN THE CIRCUS ADAPT TO A MORE BELIEVABLE ROLES, i STRONGLY BELIEVE IT WOULD HAVE BEEN A HIT SERIES. I… Read more »

Not a good way to end the series. I was afraid it would flop, and this was the result I was afraid of, though prepared for. None of it was fair.

This ending does not do the series justice – it should not have been cancelled!!

i is very sad to see this show go…that should not have been the finale….maybe a mid..ali..ty …or something…..i need more : C