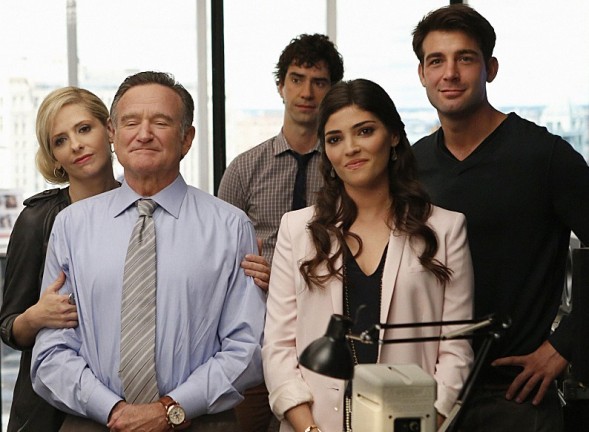 Like the rest of the world, the cast of The Crazy Ones — Robin Williams’ last TV series — was shocked by the comedian’s sudden death. The CBS sitcom ran for 22 episodes before being cancelled in May. Here are some of their thoughts…

Sarah Michelle Gellar told People, “My life is a better place because I knew Robin Williams. To my children he was Uncle Robin, to everyone he worked with, he was the best boss anyone had ever known, and to me he was not just an inspiration but he was the father I had always dreamed of having. There are not enough adjectives to describe the light he was, to anyone that ever had the pleasure to meet him. I will miss him everyday, but I know the memory of him will live on. And to his family, I thank them for letting us know him and seeing the joy they brought him. Us crazy ones love you.”

The Crazy Ones creator David E. Kelley said, “The talent was legendary. But equally inspiring, perhaps more so, was his kindness and humanity. A gentle soul who touched us all. A very special man, and our hearts are broken.”

Via Twitter, James Wolk simply posted a picture of he and Williams in matching baseball shirts from the show.

Tiya Sircar, who appeared in three episodes, wrote “‘That the powerful play goes on, and you may contribute a verse.’ I had the immense honor of working (though briefly) with #RobinWilliams– one of my acting heroes. I wish I had had the guts then to tell him that I consider his work in Dead Poets Society and Good Will Hunting to be some of the finest acting I’ve ever seen. Or hell, that’s ever been done. He was a singular talent and a sweet, gentle soul to boot. I hope he can now find even a fraction of the joy he’s brought to this world. I imagine that would still be a whole hell of a lot.”

Singer Josh Groban, appeared in two installments of the sitcom and wrote, “Stunned. Devastated. I treasure my time with him. Robin was and will always be an original and a brilliant kind soul.”

zWhat do you think? Did you enjoy Williams’ work? Do you have any favorite performances?

I never been a fan of the “good guys” in movies, and Williams acting constantly oozed good heartness, hope and compassion; thats what i hated the most about his films: too emotional, man. It annoyed the **** out of me every single time. That said, RIP

God Bless Robin.I will always miss you. Will always love you. You were the best of the best. You were a genius that cannot be replaced. It will be a long time before anyone comes close to being as funny as you were. You had a very big heart Robin so keep em laughing in heaven. I love you always.rest in peace sweet heart.

I use to watch robin in the 70’s in happy days till he got his own show mork &mindy. I have truely enjoy his movies, tv shows. I know his family lost a love one. We fans lost a talent person who knew how to make people laugh, cry and even scared in certain movies. He was a gifted actor and comedian . We will miss him, I know that his family will miss him very much. I lost someone special like robin who made others laugh too. To his family and friends it will take time to feel the… Read more »

This is but a small sampling of the impact Robin Williams had on me. If I were ready to tutn in for the evening and I noticed Robin was going to be a guest on one of the late night talk shows I would always delay turning in and watch him. I didn’t want to miss the mayhem that was sure to ensue or the genius of the man! I’m glad now that I got my fill of him on each and every occasion! I’m sorry that his pain was too great! RIP good soul!!!

As a recovering alcoholic (34 years) and having attempted suicide more times than I care to remember, I know exactly what he was feeling and why he killed himself. I’m so sorry that he had to endure that pain.

I think the psychiatrists today influence people to commit suicide, just look at their track record. They particularly target brilliant artists. This one is no different. Robin was a legend, a brilliant artist. Perhaps one of the top ten if our time. Too bad he didnt realize the psychiatrist was trying to do him in. This is blatantly the work of psychiatry. The bews even stated even he was in a deep depression, that tells me psychiatrists were involved.

I really didn’t care much for Williams as an actor/comedian but I am saddened to hear of his death. My condolences and sympathy.

Why say anything at all then?

Blaming CBS for cancelling Robin Williams series “The Crazy Ones” makes as much sense as blaming being outside in winter without a coat for catching a cold. Robin Williams suffered from a mental illness that was unrelated to his actual events in his life. There is no logic to mental illness, no rational ’cause and effect’ to account for it. Blaming CBS is both pointless and ignorant.

Obviously your not a real fan. Let us mourn his loss . And we can blame anyone we want. It’s too much of a coincidence. Did you watch the show ? Or are you just wanting to post your logics on everyone whose hurting?!?!! Part of grieving is blaming someone whether it’s indirect or direct? Our comments should not cause effect to your actual life. But your the therapist. I’m going to continue celebrating his memory. Have a good life!!!

I did watch the show and while not his best work, I enjoyed it very much. I was a huge fan of Robin Williams and feel his death is truly a tragedy. However, he suffered from a hideous disease which robbed him of rationality and most of all, hope. CBS did not do that, nor did any one person or entity. The focus of blame needs to be on the ineffective ways we have of treating chronic depression and the medications which, obviously, don’t work very well. If any of those things had improved over the last few decades, perhaps… Read more »

Just because a person suffers mentally does not dissociate that person from his/her life. Anyone who understands mental illness also knows that there are triggers that make symptoms worse. Therefore it IS related to actual life events!

I will miss him, I loved him on the Crazy One’s and I truly believe that it’s cancellation had alot to do with his decision, sorry to say. May he be in God’s arms now and rest in peace.

I’ve been thinking the same thing. Last week Crazy One’s was still on the CBS app. I looked for it today knowing it had to be there it was gone. My heart is so broken, that show was amazing he proud his heart in soul into it! CBS should’ve switched the times not canceled the show. RIP Robin Williams you will be missed.m

My heart is broken! He was such a big part of life! Full of life! No words can express the loss to the world of entertainment. He was tops! Loved all his work. My thoughts and prayers go out to his family and I pray that he is shining just as bright in heaven as the star he was on earth! And he’s basking in the warmth and comfort of The Lord as he deserves!

I loved Robin Williams the first time I saw him on Happy Days playing, Mork from Ork he made me laugh so hard I started to cry!! What with Nanu, Nanu, which eventually led to his series Mork and Mindy, which I totally loved, and still love til this day!! Then, there are his tremendous acting roles in, “The World According To Garp, Good Morning Vietnam, etc….” as well as his HBo Specials which were off the rocker funny as all heck!! Robin, was a talent to behold, we all were lucky enough to be a witness to this true… Read more »

My favorites of his movies were Patch Adams, where he got to be the clown AND the romantic lead, and What Dreams May Come, sadly. I still remember his first HBO special, where he blew a bubble and slipped into Glinda from Oz: “Are you a good witch, or a bad witch?” I could hardly breathe for hours! I’ll miss him, and I understand why he’s gone. 🙁

Robin was my favorite comedian, following his mentor, Jonathan Winters who is also gone. There is a void in my heart. I loved him them both.

And contributing to his depression was the cancellation by CBS of his series, The Crazy Ones. Frickin’network.