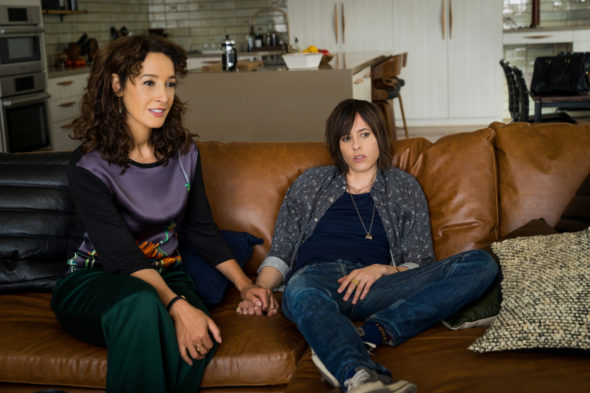 The L Word: Generation Q returns to Showtime for its third season next month, and the cable channel has released a trailer teasing all the drama to come for Bette, Shane, and their friends. Jennifer Beals, Katherine Moennig, Leisha Hailey, Arienne Mandi, Leo Sheng, Jacqueline Toboni, Rosanny Zayas, Sepideh Moafi, and Jordan Hull star in the series which is a sequel to The L Word. Guest stars will include Rosie O’Donnell, Donald Faison, Kehlani and Fletcher, Margaret Cho, Joanna Cassidy, and Joey Lauren Adams

Showtime revealed more about the upcoming series in a press release.

SHOWTIME has released the official trailer for the new season of THE L WORD: GENERATION Q, the returning series based on the groundbreaking drama series THE L WORD(R). Packed with jaw-dropping surprises and guest stars, including musicians Kehlani and Fletcher, Margaret Cho, Joanna Cassidy and Joey Lauren Adams, season three will premiere Friday, November 18 on streaming and on demand for all SHOWTIME subscribers, before making its on-air debut Sunday, November 20 at 8 p.m. ET/PT on SHOWTIME.

Picking up right where the dramatic season two cliffhanger left off, the series continues to follow the cast of characters as they struggle with secrets, old scars and new flames on their search for “the one.” Bette Porter (Jennifer Beals) is on the brink of a devastating letdown or startling confession after Tina (guest star Laurel Holloman) appears at her door; while they determine their future together, their daughter Angie (Jordan Hull) embraces her new freedom at college, finding love in all the wrong places. At the bungalow, Finley (Jacqueline Toboni) returns from rehab and discovers news about Sophie (Rosanny Zayas) that threatens both her sobriety and their relationship. Meanwhile, Dani (Arienne Mandi) and Micah (Leo Sheng) both attempt to take major steps forward in their relationships, but Gigi’s (Sepideh Moafi) baggage and Maribel’s (guest star Jillian Mercado) temper put their plans to the test. The drama heightens as Shane (Kate Moennig) and Tess (Jamie Clayton) grapple with secrets that could tear them apart for good, while Alice (Leisha Hailey) questions whether she’ll ever find her soulmate, or if she’s doomed to be alone forever. Rosie O’Donnell and Donald Faison also return to guest star in their roles of Carrie and Tom, respectively.

Check out the trailer for The L Word: Generation Q season three below.

What do you think? Are you excited to see new episodes of The L Word: Generation Q on Showtime next month?