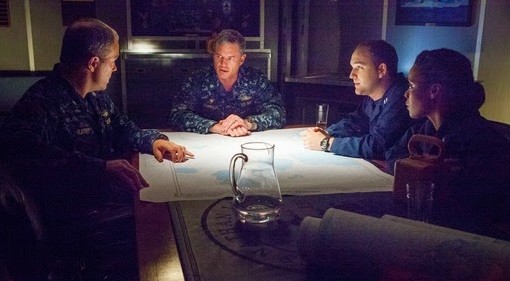 Next summer, you’ll be able to watch season two of The Last Ship TV show on TNT. The cable channel has picked up the new action series for a second season of 13 episodes.

In a statement, TNT president Michael Wright said, “The Last Ship has become this summer’s top drama among key adult demos with its epic scale and visceral storytelling.”

On The Last Ship, the crew of the USS Nathan James must try to find a cure for a deadly virus that has wiped out most of the world’s population. The cast includes Eric Dane, Adam Baldwin, Rhona Mitra, Charles Parnell, Christina Elmore, Michaela McManus, Sam Spruell, Travis Van Winkle, and Tracy Middendorf.

The first four episodes of Last Ship have averaged 4.66 million viewers each week along with a 1.1 rating in the 18-49 demographic. It’s TNT’s third most-watched series this summer, behind Rizzoli & Isles and Major Crimes.

Today, the cable channel also renewed Major Crimes and Falling Skies for next summer. The latter will return for its final season.

zWhat do you think? Do you like The Last Ship? Are you glad it’s been renewed or, do you think it should have been cancelled instead?

This is one of the best shows on TV. My family is so happy it has been renewed. This is one show that is done so well and moves so fast that we can’t wait for the next episode every week. I just hope they don’t wait a year for season 2. Thank you for renewing this great show with such a great cast.

Awesome show! Our entire family looks forward to seeing it each Sunday evening and even sneak in a few extra viewings online. We’ve recommended it to all our friends also. Glad it was renewed!! Thanks!

Complete tripe, garbage. Cancel! I watched the first couple of shows, what a horror! It is certain the the writers of this mess never served a bloody day in uniform else they would know that the command structure on that Russian ship would collapse in 3 minutes under Admiral Mad Man there, what with his executing his own men in front of the crew… Also, why is it that writers, producers, etc of these garbage heaps always assume that American audiences are really so utterly unsophisticated that they are unable to handle anything beyond the standard, cookie-cutter formulaic piles of… Read more »

Love this show. Of course, Eric Dane is really easy to watch anywhere. I don’t have the background or technical knowledge to catch any practical inconsistencies, except maybe the parachute gaff, but the characters are great. Love the open acceptance of the Christian beliefs of some of the crew. I hope you stick with the direction you are going and make this a long-running series.

“Love the open acceptance of the Christian beliefs of some of the crew.” I just posted on this story and then saw this earlier post and it reminded me of an interesting point which someone raised at work a few months back. He said that almost half of Americans believe that the world is 6000 years old and that ‘cavemen’ cohabited with dinosaurs and what not… we have about a half dozen yanks in our offices but I never noticed anything particularly odd about them with respect to their being a superstitious lot or anything; they strike me as a… Read more »

As a “retired” Naval Architect, I find some of the technical aspects of the show a bit fantastic, BUT, very entertaining if only in visual effects or excellent acting of the cast. Using only 3 parachutes to pull a 9,200 tonne ship is not very feasible. Also the propellers may rotate the proper direction but the blades are at the wrong angle. Ships powered by Gas Turbines use variable pitch propellers because the shaft can turn only one direction. However, the series exemplifies the dedication of the United States Navy (who I worked for over 39 years) and most of… Read more »

The Last Ship*I* believe exemplifies what the NAVY motus operandi should be and I have NO DOUBT all our seagoing comrades feel the same way. It would be an honor to serve on that ship as it would have been on any version of the Enterprise no matter what Captain. (Still on the fence with Janeway tho) She had to deal with Q as did Picard. Although KIRK had a run in with (at that time) a nameless race (Trelane) and was probably the Q but the writers never gave them a name; ah the 60’s!!!

What is better than Eric Dane in a naval suit! Love this show, my favorite of the summer. I have to DVR it, but can’t wait to watch it the very next day. All of the actors are great. Small suggestion – It might be good to mix some drama of what does on inside the ship.

Yes Joe, I agree! Detective Carter from Persom of Interest is sorely missed! She was awesome and integral to the show, so I definitely didn’t see that coming! Also, I never had the pleasure of watching Finch on Lost either, but I’ve heard he was awesome there as well. His wife in real life guest stars on Good Wife from time to time and she’s super talented too. Meanwhile, the Last Ship is so well written and I see several arcs beside the main storyline involving finding the cure for this apparently man made bio-killer. There will most likely be… Read more »

Almost forgot, I agree with Joe’s comments below as well. I am a HUGE CBS fan, so until I upgrade to DVR, I access “The Last Ship” from demand. Intelligence, although short lived, was a good show also. Meanwhile, as a Person of Interest fan, there’s a beautiful dog named “Bear” that brings an added pleasantness. It is the same for the “Kernal” on the Last Ship, as these animals bring a welcomed depth to both shows. I’m telling you, it makes for some “dog” gone fine tv!

Yes; P.O.I. is a MUST WATCH for me as well; I DVR it because I THINK I have something else going on at the time; still saddened the police offer was written out of the show dead ;-( ) NEVER watched LOST so I didn’t get to see Finch’s character. The ONLY place I saw him before was the first _SAW_ movie playing the orderly…

The Last Ship is HOT! Awesome! Micheal Bay has given us a masterpiece! Great to see Eric Dane again since Grey’s! Meanwhile, too bad we have to wait until next summer once this first season is finished. Oh and I almost forgot, love the dog! I get so concerned when they have a land mission for survivors, fuel and supplies, I’m busy looking for the “Colonel”, in order to be assured that he’s ok as well. Looking forward to the next great ep.!

A good prototype should continious whith a serial of seasons we need the feed back to mankind future that’s very near,

Ahh, interesting comment. By the way, what country do you hail from?

The cast and crew of _The Last Ship_ is first rate; WATCH DVR RELIGIOUSLY…amazing a series I ENJOY THAT MUCH has been renewed! I figure maybe 2 or 3 seasons and then a resolution…unlike the 1 season ABC series; _The Last Resort_ which could have gone on but since they KNEW the end was ordained they resolved the series in the last episode…rather satisfying even tho it was canned! Intelligence; FLASHFORWARD; The Cape; The Event; A Gifted Man…all GOOD-EXCELLENT series CANNED after 1 season ;-(((