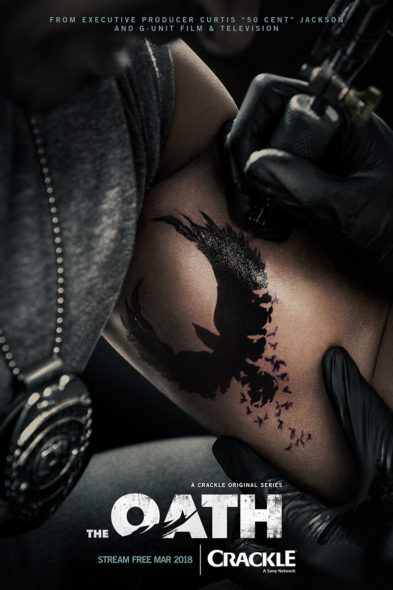 TV show description:
From creator Joe Halpin, The Oath TV show is contemporary crime drama centering on a gang called The Ravens — made up of corrupt police officers. When Ravens leader Tom Hammond (Bean) is imprisoned, his son, Steve (Kwanten), takes the helm.

Steve’s tenure in the top slot is complicated by the fact he has made a deal with Agent Aria Price (Röhm) to accept an undercover agent, Damon Byrd (Escarpeta), into their ranks. Steve and his brother, Cole (Hardrict), must keep Damon’s true identity as a mole a secret from the rest of The Ravens, including Tom, in order to keep themselves out of prison.

To further complicate matters, there is significant tension between the Ravens and other rogue cop gangs, as well as the local drug dealers. Although they have all sworn to protect and defend the public, The Ravens aren’t above stealing, double-dealing, or even money-laundering. These dirty cops live by their own code — to protect one another against all threats, whether from outside the gang or within it.

Series Finale:
Episode #18 — Restitution
The death of a Raven has everyone on edge. Carmen and her allies gun for Victor and all the other loose ends before heading home. Steve and Agent Andrews race to take down the cartel before more blood is shed. Kraley tries to regain control of the group while Cole suggests a shocking way out.
First aired: February 21, 2019.

What do you think? Do you like The Oath TV series? Should this Crackle TV show have run longer?

I hate how we have to wait so damn long to know if a Crackle series geta renewed or not, but this and StartUp are ALWAYS worth the wait. Season 3 needs to come out, and SOON!!!

Please keep it going. Would like to see
season 3!!

Man the oath shows how cops really can and will get down. Keep that **** rolling!!!!

Definitely should renew or find another network!