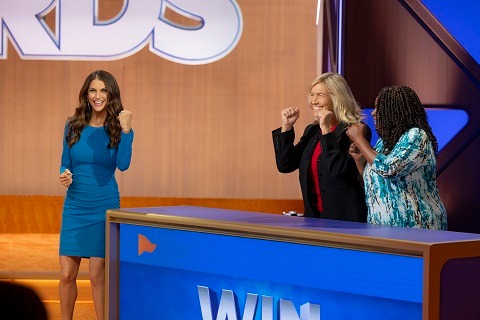 Tug of Words is returning to Game Show Network later today for its second season. Hosted by Samantha Harris, the competitive game show features two teams answering word clue questions and pulling the “tug of war rope” to their side with each correct answer. The game show airs daily at 3:30 pm ET. The show launched in November 2021, and Harris replaces Ahmad Rashad as host for season two.

From the producing team behind “Who Wants to Be a Millionaire,” TUG OF WORDS is a fast-paced game where two teams compete to answer word clue questions correctly and pull the flag on the “tug of war rope” to their side.

With each round, an additional letter is added creating four and five letter words to solve. The team with the flag on their side after three rounds wins the game, qualifying them for the bonus round where they have opportunity to compete for $10,000.

What do you think? Are you planning to check out Tug of Words on GSN?

I think it is very hard to win in the final when wrong answers lose 1space. Get rid of that.

Tug of words is the most boring game show ever. The complete waste of 30 minutes air time.